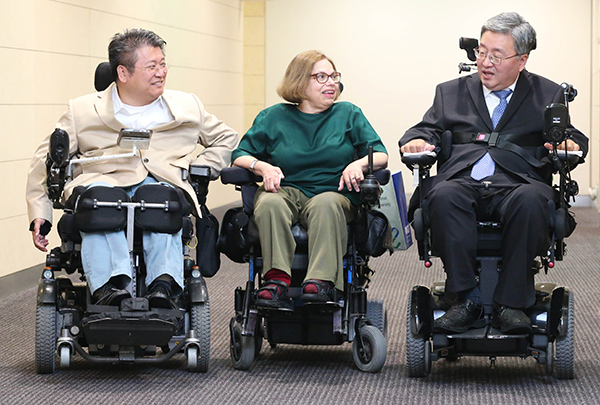 Judith Heumann, center, the U.S. State Department’s special adviser for international disability rights, speaks with Seoul National University Prof. Lee Sang-mook, right, and Kim Jong-bae, vice director of the National Rehabilitation Research Institute and an adjunct professor at the University of Pittsburgh, at an international conference on disability issues in Incheon on Oct. 24. By Shin In-seop


Judith Heumann, the U.S. State Department’s special adviser for international disability rights, said during an October discussion with activists in Songdo, Incheon, that the essential issues to be tackled in Korea in order to promote the rights of the disabled are increased government investment in education, infrastructure accessibility and societal assimilation.

“Governments have to work on fostering discussion in the Asia-Pacific region, and governments need to talk with governments about the inclusion of people with disabilities in society,” Heumann said. “There still are not high-level discussions.

“My responsibility at the Department of State is to work on the inclusion of disabled people into our foreign policy and diplomatic court,” Heumann continued. “And one of the aspects of my work is reaching out to American businesses and getting them more involved with the issues.”

She added that forging a bond between the United States and Korea to promote the rights of the disabled would be mutually beneficial to both countries.

Heumann, who at 18 months of age suffered from polio and for most of her life was confined to a wheelchair, has championed the rights of the disabled for more than three decades.

She was invited to be a member of the discussion panel last month alongside Lee Sang-mook, an environmental science professor at Seoul National University, and Kim Jong-bae, vice director of the National Rehabilitation Research Institute and an adjunct professor at the University of Pittsburgh. JTBC, the Korea JoongAng Daily and the JoongAng Ilbo were all present to cover the event.

The panel took place in the midst of the Incheon International Conferences on Disability at the Songdo Convensia Convention Center in Incheon, which began Oct. 24 and ended yesterday.

Lee, 50, who also heads the Center Quality of Life Technology (QoLT), a program to promote research projects on disability rights supported by the Ministry of Knowledge Economy, was in a car accident six years ago in California. He had organized a geological field trip supervising students from SNU in California when the van flipped over and left him with a spinal cord injury.

“That place changed my life,” Lee said. “Their rehabilitation program was focused on sending me back into society as quickly as possible.”

He added that the high medical costs in the United States encourage quick rehabilitation, unlike the Korean system.

Lee returned to Korea three months later. He began teaching again after six months. His experience was reported on by the media, and since then, he has been approached by the Ministry of Knowledge Economy to develop the Quality of Life Technology project with a $10 million annual budget.

“In Korea, when there is a disability issue, it is a matter of the Ministry of Health and Welfare or the Education Ministry, but as we are becoming a quickly aging society, they thought this assistance technology and rehabilitative science could be profitable.

“This is an election year, so everyone is talking about welfare and public health and the middle class and people in trouble. We are a very hot topic now,” Lee said.

“The perception of people with disabilities was pretty bad years ago in Korea, but it has changed a lot with economic growth. When we started this project, we started at a time when Korea was looking for change as a result of economic growth. If we succeed, it can become a model for other developing countries if they become more economically prosperous.

“Korea is the only country in the world that was a recipient of overseas development and that has become a donor. We want the QolT to reach out to other developing nations and help countries around the region.”

Kim has also suffered with a disability, dating back to the 80s. He has been confined to a wheelchair since then. He recalled the developments in accessibility for disabled people in Korea. “At that time, I was stuck in my home in my bed, but five years later, I started working with computers, and after several years could buy an electric wheelchair.”

Heumann was appointed to her current post in 2010, prior to which she had served as director for the Department on Disability Services for the District of Columbia. From June 2002-6, she served as the World Bank’s first adviser on disability and development and also served under the Clinton administration for the Office of Special Education and Rehabilitative Services under the Department of Education.

She said that Korea could benefit from looking at the sorts of investments the United States has successfully made in the areas of research and technology to help promote disability rights and added that U.S. universities can be exemplary models.

“The Department of Education invests $40-50 million a year in research on technology in schools to work with students with various types of disabilities,” Heumann said.

A graduate of Long Island University, Heumann received her master’s degree in public health from the University of California, Berkeley, but stated she had to fight for the right to be able to participate in school without being the subject of discrimination.

In light of the upcoming presidential elections in both the United States and Korea, Heumann said that so far there has been little discussion regarding disability rights from U.S. presidential candidate Mitt Romney’s campaign, but that thus far, the current Obama administration has appointed a number of disabled people in positions across the federal government and has worked on the advancement of education and employment for disabled.

She added that achieving disabled people’s rights in the United States is a bipartisan effort. Both local community efforts and the Department of Justice has been active in getting disabled people registered and out to vote, she said.

Lee and Kim both said that the three presidential candidates in Korea are unclear about their stances on disability issues, but said that public welfare is an important issue in the upcoming election.