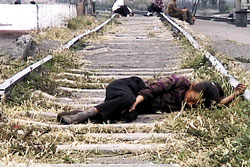 North Korea's grain production remains at similar levels to the early-1970s, and the amount of food available per person in the communist nation has dropped 40 percent from four decades ago, data from a U.N. food agency showed Sunday.

North Korea's annual grain production totaled 4.52 million tons in 2010, similar to levels in the early 1970s, according to Food and Agriculture Organization data available on the Web site of Statistics Korea. (Yonhap)