A 16-year-old student surnamed Kim was flashing 300,000 won ($274) in cash to his friends sometime in June, telling them he earned the money with minimal effort. He bragged to his friends that the money came from selling a smartphone he stole.

Already charged with stealing a smartphone from a public sauna earlier this year, Kim resumed his habit of stealing smartphones for seemingly easy money with his friends until their arrest last month by police. 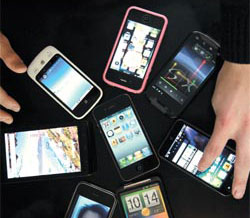 The Seoul Hyehwa Police Precinct said yesterday they charged Kim and his seven teenager accomplices with stealing smartphones worth around 8.2 million won over nine occasions in northern Seoul.

The investigators added the eight minors began their criminal activities in June until September and “there could be 27 more theft charges committed by the eight” than the eight burglary cases confirmed so far.

“The eight suspects said during questioning they had sold the stolen phones to brokers, whom they contacted through online advertisements for used phones,” said the police.

Teenagers are giving in to temptation to steal phones as handing over used smartphones to brokers is thought of as easy money without much guilt.

It is reported brokers offer between 300,000 to 350,000 won for each used Samsung Galaxy S3 and Apple iPhone 4S, while each Galaxy Note is sold for 150,000 won. With one quick phone call to a broker, anyone can make a profit in a couple of hours in return for stolen mobile phones.

“I thought about stealing smartphones in a jjimjilbang, or public bath house, while a phone owner is sleeping there as a single gadget could earn me a pretty big sum of money,” said a 17-year-old student surnamed Kim, who lives in Songpa, southern Seoul, speaking on condition of anonymity.

The number of smartphone thefts has seen a dramatic jump to 7,483 as of October of this year from 1,972 last year, according to the Seoul Metropolitan Police Agency.

The growing number of thefts by minors has been attributed to relatively easy access to brokers, who can be contacted through smartphone purchase advertisements on the Web.

To witness firsthand the illegal smartphone trade, a JoongAng Ilbo reporter made a call to a broker Tuesday. The broker’s phone number was easily found on the Web by searching for “acquired phone” on a portal site. The reporter told the broker he had picked up a smartphone on the street and asked if it could be sold.

The broker said he would send a “delivery man” at 9:00 p.m. the same day to buy the mobile phone and give money to the reporter in return. The delivery man came at 9:00 p.m. near the Yeondeungpo District Office, the location agreed on by the seller-disguised reporter and the broker.

“Mostly those in their teens and early 20s sell smartphones of unknown origins to us,” the delivery man told the JoongAng Ilbo reporter after being told the reporter’s identity. “Men in their 40s and 50s also make arrangements to hand over mobile devices. After I receive the phones, I send them via parcel service to the brokers.”

The reporter then made a call to the broker who connected him with the delivery man. After being told the reporter’s identity, he consented to a short phone interview.

“I purchase around 60 to 70 handset gadgets every day and operate with eight delivery men under my direction,” said the broker. “I do not send out delivery men to pick up phones when it is suspected that the police are being involved to bust the trade ring.”

A growing case of teenagers’ involvement in the illegal trade is not a surprise anymore, investigators say.

“It is highly suspected that illegal smartphone trade involving teenagers comprises a considerable portion of total trade volume as smartphone use is already widespread among youth,” said a police officer at the agency.

Professor Lee Yung-hyeock of the Korean National Police University claims it is the adult brokers who are at the root of the problems implicating minors. “Smartphones are both easy to steal and easy to sell for a high price, thus becoming attractive targets for minors,” Lee said.