Sharp may be on its last legs as bond risks climb

Sharp may be on its last legs as bond risks climb 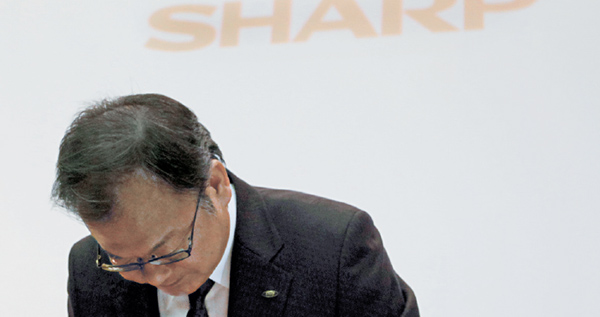 Sharp President Takashi Okuda bows at a news conference in Tokyo on Thursday. The Japanese TV maker warned that it might not be able to survive on its own, as it almost doubled its forecast for full-year net loss to 5.6 billion dollar. [REUTERS/YONHAP]

The cost of insuring 1 billion yen ($12.44 million) of Sharp’s debt for five years rose by 125 million yen in the past month to 680 million yen in advance and 10 million yen annually, according to data provider CMA. Credit-default swaps (CDS) of Panasonic and Sony have also surged, with contracts pricing in a nonpayment risk of about 30 percent. Those for Samsung Electronics were little changed in the period, the data show.

Fitch Ratings cut Sharp from one level above junk, or non-investment grade, by six steps to B-, after the company forecast last week a record $5.6 billion full-year loss and said there’s “material doubt” about its ability to survive. Panasonic, Japan’s No. 2 TV maker, had its debt rating lowered two levels by S&P on Friday after predicting it will lose 30 times as much money as analysts estimated.

“It won’t be easy for Japanese electronics companies to recover because the center of gravity in the industry is shifting to developing Asia,” Ayako Sera, a market strategist at Sumitomo Mitsui Trust Bank, which has the equivalent of $411 billion in assets, said on Friday. “If the Japanese companies don’t do anything, their brand value will fade away.”

Japanese technology companies including Sharp are failing to come up with hit products to challenge Samsung and Apple. The yen trading about 6 percent from its post-World War II high is also weighing on earnings by making their products more expensive abroad. Elpida Memory, the last major Japanese maker of computer-memory chips, filed for bankruptcy in February.

“From the market’s perspective, Sharp is in extreme danger of going out of business,” Taketoshi Tsuchiya, Tokyo-based director of credit trading at Barclays, said on Friday.

Sharp’s 94.9 percent chance of default in five years is based on the assumption that investors would recover 27 percent of the bonds’ value if the company fails to adhere to its debt commitments, an expectation that CMA lowered from 30 percent a month ago.