Three defectors make it to Laos, to come to Seoul

Three defectors make it to Laos, to come to Seoul 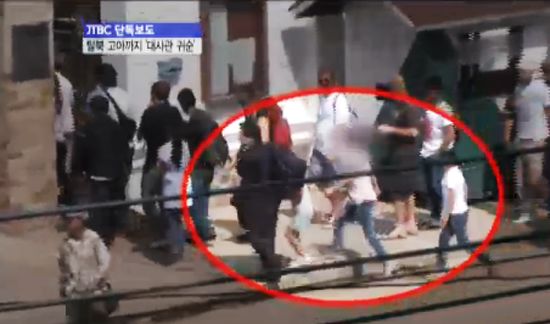 Three North Korean defector orphans entered the Thai Embassy in Vientiane, the capital of Laos, last Friday, according to an exclusive report by JTBC yesterday.

The young defectors were immediately taken to the South Korean Embassy in Laos and are waiting to leave for Seoul. The orphans managed to defect with the help of Song Boo-keun, a Christian pastor who works on issues related to North Koreans’ rights.

Lee Gwang-ok, 15, speaking under an assumed name, shared with JTBC the story of her difficult escape from the North.

Lee, one of the three orphans, said that she had tried to defect last year but was caught in Yanji, China, and was repatriated to the North where she was imprisoned for 10 months.

“At the prison camp in Hyesan [a city in the northern part of Ryanggang Province], I endured by eating 360 pieces of gangnaengi [Korean sweet popcorn] every day,” Lee said.

“It was painful receiving mental training without moving for 24 hours.”

She also said that “My mother left the house promising that she would come back but she didn’t.”

The three defected orphans are expected to arrive in Seoul after one to two months depending on legal procedures.