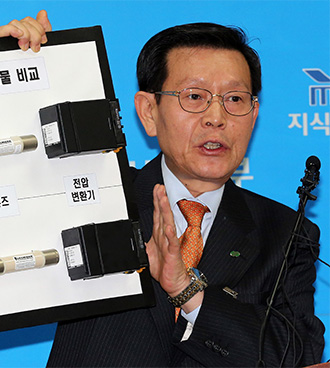 Parts installed in two of the nation’s nuclear power reactors, Yeonggwang No. 5 and No. 6, have fallen short of safety standards, the Ministry of Knowledge Economy said yesterday.

A total of eight parts suppliers were found to have fabricated certifications over the last decade, the Korea Hydro and Nuclear Power Corporation (KHNP) confirmed.

The ministry halted operation of the two reactors yesterday and said it will not authorize their resumption until the parts are all replaced, possibly by the end of this year.

In a bid to allay public fears, the ministry said the use of parts lacking the proper paperwork does not pose a safety threat.

“There is no threat of a radiation leak as the parts in question are mostly related to fuses or power switches,” Hong Suk-woo, the minister of knowledge economy, said yesterday during a press briefing. “The problem is not that the components are flawed but that they are missing the right paperwork to prove they are suitable for use at nuclear power plants.”

Hong added that in lieu of parts produced specifically for such plants, the KHNP approves the use of parts made for other industries as long as the suppliers can provide certificates issued by one of 12 approved organizations.

Seven Korean companies and one U.S. firm that deliver parts made in the United States and Canada were found to have fabricated certificates to make it look as though their products had been approved by United Controls International. These eight suppliers faked 60 certifications for a total of 234 parts, supplying 7,682 items worth 830 million won ($760,000) in total. Almost all, or 99 percent, of the parts were used in the two aforementioned reactors. The others were installed at reactors No. 3 and 4 in the same plant and in reactor No. 3 at a plant in Uljin, North Gyeongsang.

The KHNP requested on Friday that the prosecutors’ office in Gwangju make a complete investigation of the case. It says it is not excluding the possibility that insiders may have been complicit in the fabrication of documents.

Hong said the ministry will work quickly and transparently to shore up confidence in the sector so as not to hurt power plant exports.

“The government will make sure there is no doubt about the safety of our reactors,” he said.

Meanwhile, fears mounted that the two halted reactors may cause energy shortages as the winter cold sets in and energy consumption hits its peak.

While the power reserve was already expected to dip below three million kilowatts in January and February, the ministry speculates that it could plummet to perilously low levels that would trigger automatic power cuts if the reactors are not put back online before Christmas. “We need to devise contingency plans to make sure there are no problems this winter, and we have to scale back energy consumption,” Hong said.

The ministry met with representatives from Korea Power Corporation and other officials yesterday afternoon to discuss ways of effectively managing power usage through the winter.