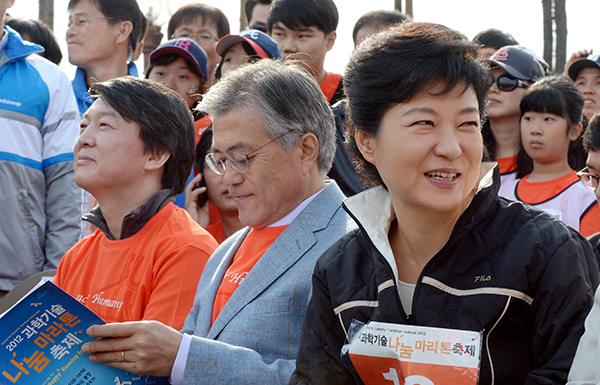 It appears Ahn seems to have complex reasons to push the discussion forward. Senior members of the opposition, including Paik Nak-chung, constantly pressured Ahn to push for the consolidation. Ahn’s amateur remarks, including reducing the number of National Assembly members by 100, were not welcome. A critical factor was the impact on his approval rating. If he remains reluctant, voters will lose patience, and he may have grown anxious over a possible collapse of his popularity.

Moon’s attack using the single candidate logic was destructive. It was a powerful weapon to turn the Honam (Jeolla) sentiment away from Ahn toward him. Since the end of last month, the Honam sentiment hoping for a power change showed a clear shift toward Moon, who is more active in the candidate merger.

Opinion polls showed that the shift may be small but the trend of change is significant, adding that the one who is passive in the merger is at a disadvantage.

Conservative voters have begun to unite, and if the opposition supporters turn away, no one knows when Ahn’s popularity may collapse. Regrets remain in the Ahn camp that he should have made more decisive moves earlier in the game, calling for more drastic political reform, forming a new party and proposing constitutional revisions such as reducing the length of the presidential term.

Moon’s camp is secretly pleased that Ahn has lost some momentum. However, Ahn has earned some time during the negotiation. Now, anyone who causes a breakup will have to take all the blame.

At first glance, it may seem Moon has taken the initial position of advantage, but Ahn is hardly at a disadvantage. He can now demand the most favorable merger conditions at the most favorable time. It is not so simple to attain a merger that “can impress people and bring a synergy effect.” It is actually a frightful demand.

Uncertainties remain amid the coming problem of candidate consolidation. The young aides in the Ahn camp have a lot to say, and they often insist, “Ahn Cheol-soo is running to change the political establishment, not to help the Democratic Party’s votes.” The experiences from the Seoul mayoral election should not be taken for granted, as Ahn has blissful memories of emerging as a star overnight.

Also, we need to beware of the trap that those who champion a change of power may fall in. Who are the ones frustrated by a delay in the merger? If the voters, especially those in Honam, pressure Moon to concede, a last-minute upset is also possible.

In Korea’s political history, we cannot find an example of a successful merger between candidates with higher than a 20 percent support rating. The merger between the two politicians against the Rhee Syng-man regime, Shin Ik-hee and Jo Bong-am, only happened after Shin Ik-hee died suddenly. Kim Young-sam and Kim Dae-jung failed to settle on a single candidate, and Chung Ju-yung, who earned 16 percent of the votes, Park Chan-jong, who got 6.4 percent, Rhee In-je, 19.2 percent, and Moo Kuk-hyun, 5 percent, all decided to run by themselves.

In fact, the 2002 merger is a rare case. Chung Mong-joon was mistaken that he would win a landslide victory based on opinion polls, and Roh Moo-hyun bet that the only chance of winning was through the merger. At any rate, the opposition candidate consolidation is an undeniable trend at this time.

Park Geun-hye cannot avoid a full confrontation now. The Saenuri Party’s election committee has always thought that the opposition candidate merger and one-on-one contest was a given.

However, those close to Park somehow had optimistic yet groundless hopes that it would be a three-way battle. Based on this misjudgment, they made repeated mistakes on the historical perspective and Jeongsu Scholarship Foundation issues.

They need to solve a complicated equation involving advocating stability and attracting conservative votes while embracing the votes that may break away from the opposition merger.

The election campaign hasn’t been that interesting so far, but it is suddenly turning into an exciting showdown. With no presidential debates, it could have become a dull battle, but fortunately, the game is likely to change completely.