Lions look to repeat on a global stage

Lions look to repeat on a global stage 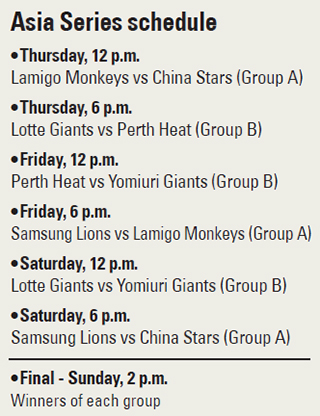 Two ball clubs will represent Korea in the upcoming Asia Series, a tournament bringing together the top baseball teams in leagues across the region. One hopes to further erode Japanese dominance of the event, while the other is looking to make a surprising run in its debut on a global stage.

The Samsung Lions, the recent winners of the 2012 Korean Series, will seek a second straight title during the six-team competition that kicks off its four-day run at Sajik Stadium in Busan today. The Lotte Giants have snuck into the tournament a the hosts of the event.

The Lions are in Group A with the Lamigo Monkeys of Taiwan and the China Stars while the Lotte Giants are to play against the Yomiuri Giants of Japan and the Perth Heat of Australia in Group B.

In the single round-robin competition, the clubs in a given group will play each other once through Saturday and the winners of both groups will meet at the final, set for 2 p.m. on Sunday.

Winning this series would make the Lions the first club to win back-to-back Asian titles, something that the formidable Japanese clubs have failed to do in the six-year history of the series.

Four Japanese clubs took the title during the first four years before the series disbanded for two years due to sponsorship issues. The Chiba Lotte Marines won in 2005, the Nippon-Ham Fighters in 2006, the Chunichi Dragons in 2007 and the Seibu Lions in 2008.

Last year, the Softbank Hawks finished runners-up with a 5-3 loss to the Samsung Lions, who also won the 2011 Korean Series.

The Samsung Lions also advanced to the final of the series in 2005, where they lost to the Marines 5-3. The 2007 Korean Series winners, the SK Wyverns, lost to the Dragons 6-5 in the 2007 Asia Series final.

Just as they did last year, the Lions will try to win the tournament without foreign players. Ryu Joong-il, the manager of the Lions, excluded Mitch Talbot (14-3) and Brian Gordon (11-3) from the starting rotation for the Asia Series.

He said he wanted to protect Talbot from a possible injury while Gordon needed rest due to a recent slump.

The most threatening opponents the Samsung Lions may face are the Yomiuri Giants, who won their 22nd Japan Series title with a 4-3 victory in Game 6 last Saturday.

The showdown between Samsung and Yomiuri would be in the final if each wins its respective group.

The Lamigo Monkeys, however, are not opponents the Lions can easily dismiss. The Monkeys, known previously as the La New Bears, advanced to the Asia Series final in 2006, where they fell to the Nippon-Ham Fighters 1-0.

The Taiwanese club has advanced to the playoffs in the four-team Chinese Professional Baseball League five times since 2006 and has won twice, in 2006 and this year.

The China Stars feature the best players from the six teams in the China Baseball League. The team has never reached the final of the series.

The Lotte Giants, who were knocked out in the second round of the Korea Baseball Organization playoffs, will find a very tough opponent in the Japanese Giants.

The club’s acting manager Kwon Doo-jo said yesterday that he would focus on winning the first game.

The team’s best pitcher Song Seung-jun will pitch the first game against Perth while ace Ko Won-jun will take the mound against Yomiuri, Kwon said.

“It is the first game for us, so we will get it and try to bring the momentum to us for the rest of the series,” he said.