Ozil’s late heroics salvage a point for Real in CL

Ozil’s late heroics salvage a point for Real in CL 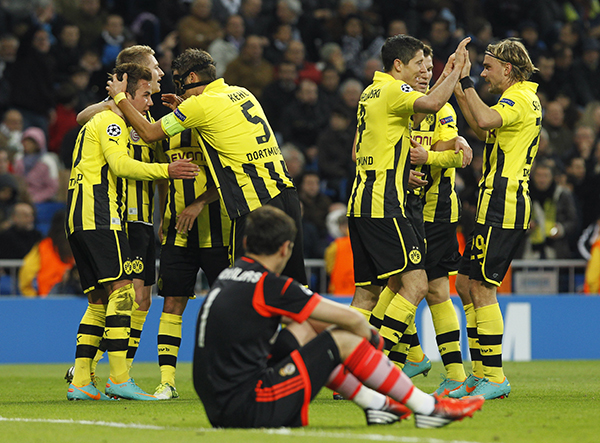 Borussia Dortmund’s Mario Gotze, left, celebrates his goal with teammates during a Group D Champions League match against Real Madrid at the Santiago Bernabeu stadium in Madrid, Spain, Tuesday. The game ended in a 2-2 draw. [AP/YONHAP]


MADRID - A moment of magic from Mesut Ozil late in the game salvaged a 2-2 draw for Real Madrid at home to Borussia Dortmund on Tuesday and boosted its chances of reaching the Champions League knockout round as Group D winners.

Cristiano Ronaldo usually takes the free kicks for Real but left Ozil to curl a sweet shot into the net off a post in the 89th minute, with Dortmund keeper Roman Weidenfeller slow to react, and put Jose Mourinho’s side level for the second time.

Ozil’s goal against a side full of his Germany teammates denied Dortmund an impressive double that would have put them in pole position to top the group after they beat Mourinho’s expensively assembled side 2-1 in Germany last month.

Marco Reus volleyed the German champions ahead in the 28th minute before Pepe equalized with a header six minutes later and Real’s Alvaro Arbeloa poked the ball into his own net on the stroke of halftime at the Bernabeu.

Real enjoyed lots of possession but created few genuine chances and Dortmund’s tactic of playing on the break almost earned them another memorable victory.

The draw leaves Dortmund in first on eight points after four of its six group matches, with Real in second, seven ahead of Ajax Amsterdam (four) and Manchester City (two) following its 2-2 draw in the other match in the section.

Mourinho, who is trying to lead Real to the 10th European crown that has eluded them since 2002, said he did not care whether they finished first or second in the group. They play at City on Nov. 21 and host Ajax on Dec. 4.

“If we finish second it is a problem for the team that finishes first in another group because they don’t expect to get someone like us,” the Portuguese said at a news conference.

“But I still think we can finish first,” he added.

“We played very well in the second half here, aggressive, dynamic. I prefer, and I think the fans prefer, to watch games like these. Other games look more like Europa League ones.”

The 5,000 Dortmund fans high up in Real’s giant arena were in fine voice long before kickoff, comfortably drowning out the home fans as the hosts controlled possession in the early stages without really threatening.

Marcel Schmelzer and Kevin Grosskreutz tested Iker Casillas after swift attacks before Reus broke the deadlock. Dortmund’s imposing forward Robert Lewandowski nodded a long ball into the midfielder’s path and Reus held off Arbeloa before crashing a shot past Casillas on the bounce.