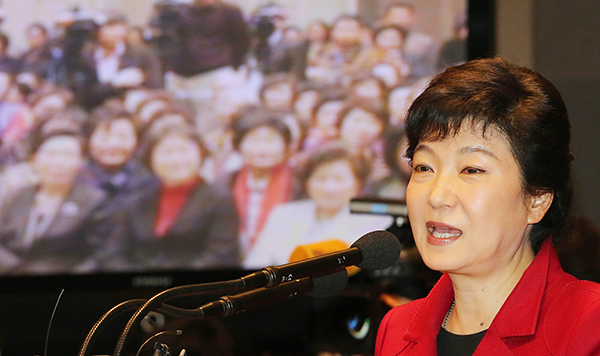 The 60-year-old politician attended two very feminine events yesterday. She hosted a “Girl Two Concert,” or town-hall-type meeting, at Seoul Women’s University with Kim Sung-joo, one of Korea’s best known female CEOs, to talk with students about their dreams and difficulties. Kim is a co-chair of Park’s election campaign committee. 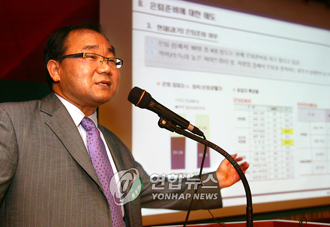 She also attended an event hosted by the Korean League of Women Voters and discussed the rights of women.

“If Korea will elect its first-ever female president, that itself is a reform and there won’t be any greater change,” she said in her speech at the second event. “Until now, Korean women have hit a wall of countless prejudices. The fact that a Korean woman will stand at the center of the country’s leadership will remove all the prejudices and bring about an amazing change into our society.”

She also promised to create a society where women can be happy both at home and at work, and where the glass ceiling will be removed.

It was clear that Park was emphasizing her gender after rivals Moon Jae-in of the Democratic United Party and independent Ahn Cheol-soo agreed Tuesday to merge their campaigns by the end of November to unite liberal votes.

With only six weeks before the Dec. 19 presidential election, the biggest nightmare for the conservative ruling party is a defeat as in 2002, when Roh Moo-hyun merged his campaign with Chung Mong-joon’s and won the presidency.

While Park has consistently stressed her ambition to become the first female president, it boomeranged recently when an academic questioned whether she was a real woman.

“[In Korean society, the role of a woman] is defined by marrying a husband, giving birth and raising a child,” Hwang Sang-min, a professor of psychology at Yonsei University, said on a talk show on Oct. 31. “That’s someone you call a woman. Just because her reproductive organs are different from a man’s, you don’t call her a woman.”

Hwang continue, “Park never played the role of woman, although she has female genitals.”

Park has never married nor had a child.

After Hwang’s remarks, the Saenuri Party called him “insane” and said he insulted the entire female population of the country.

At a campaign advisors meeting yesterday morning, Park made her first attack on Moon and Ahn and their highly publicized attempt to unite their campaigns.

“How can they possibly overcome the crisis of the people’s livelihood with a one-time show that has nothing to do with the everyday life of the people?” Park said.

Stressing that a global economic crisis is possible and that the foreign affairs and security situation is unpredictable on the Korean Peninsula, Park said, “We cannot allow a victory to forces who openly promise to reverse international promises or forces whose determination to defend the NLL is doubtful.”

Moon has threatened to renegotiate the Korea-U.S. free trade agreement if he is elected president.

NLL stands for the Northern Limit Line, the de facto maritime border with the North. It became a controversial topic in the presidential race after the Saenuri Party claimed that President Roh Moo-hyun disavowed the NLL during a 2007 summit with North Korean leader Kim Jong-il.

Moon, at the time, was Roh’s chief of staff and a key architect of the summit.

Ahn vowed yesterday to defend the NLL during his visit to the operations command of the Air Force in Pyeongtaek, southern Gyeonggi.