U-Kiss to hold concert in England

U-Kiss to hold concert in England 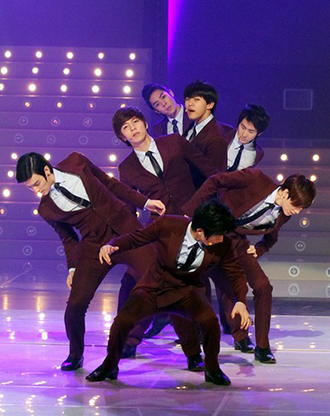 After performing in Peru on Nov. 1, a special video of the performance that aired on the BBC has generated interest in the Hallyu group U-Kiss in the U.K.
The program, which aired on Nov. 2, introduced the six-member Korean boy band to the British public and has resulted in a demand for the boys to perform there.

Currently the group has been asked to perform at a venue in Richfield. Details are being fine-tuned by the organizer and the group’s agency at the moment.

The boy group boasts more than 100,000 members in its official fan club, and as its members speak a number of languages, it appeals to fans worldwide.
As one of the icons of K-pop, the troupe will embark on an Asian tour early next year and then hold a five-nation South American tour, a first for a K-pop act.
Following shows on the two continents, the band is looking toward conquering Europe.

The band is currently in Japan to take part in Christmas promotions as well as taking part in Tokyo Girls Collection, a hybrid fashion and music show.
Back in September, the group also performed at the famed Japanese indoor arena, the Budokan.