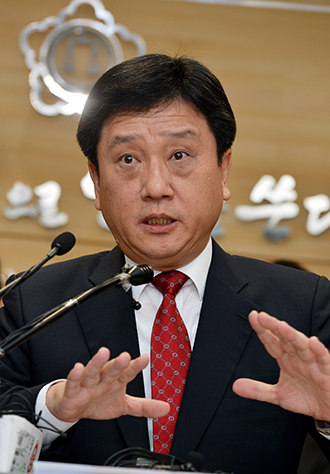 The independent counsel said it will not indict Lee Si-hyung, 34, President Lee Myung-bak’s son, as he did not violate the country’s real estate laws when he purchased the plot in Naegok-dong, southern Seoul, where his father’s retirement home was to be built.

The counsel however concluded that Si-hyung evaded taxes as the money he received from his uncle and mother for purchasing the Naegok-dong land was not declared. The counsel said it handed over the investigation report with a reference to gift tax evasion to the National Tax Service.

At a press conference held yesterday at the Seoul Bar Association in Seocho-dong, southern Seoul, the independent counsel, headed by Lee Kwang-bum, presented its 30-day investigation results to the public.

The independent counsel said the 1.2 billion won ($1.1 million) Si-hyung borrowed, 600 million won each from his mother and his uncle Sang-eun, chairman of DAS Corporation, was not a loan but a gift.

In May of last year, the Presidential Security Service purchased the Naegok-dong land for 5.4 billion won, with Si-hyung paying 1.12 billion won for part of the land.

The counsel said Kim caused a loss to taxpayers of 972 million won by purchasing the 2,143 square meters (0.53 acre) of land that was planned for use by the security service for 4.28 billion won, though its actual value was 3.37 billion won.

Kim Yoon-ok, the first lady, was also not indicted by the independent counsel as it judged that there was no hard evidence to link her to the land purchase.

Yim Tae-hee, former Blue House chief of staff, and Kim Paik-joon, a former senior secretary to the president for administrative affairs, who were known to have been involved in the land purchase, were not indicted for the same reasons as the first lady.

“We feel regret for some conclusions that the independent counsel has made,” said Choe Geum-nak, senior presidential secretary for public affairs.

He also expressed regrets about the tax evasion allegation the independent counsel levied against the president’s son. “Overall, the whole investigation process was politically biased because the members of the independent counsel were chosen by one particular political party. It caused too many unnecessary misunderstandings and arguments,” Choe said.