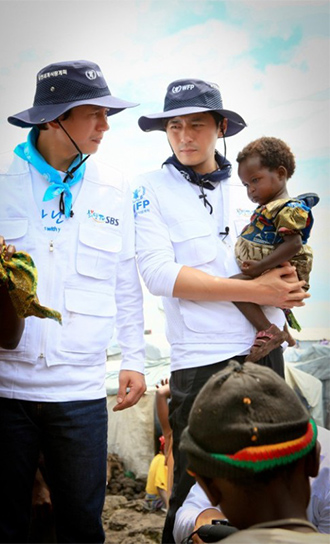 Co-stars from “A Gentleman’s Dignity” showed not just their dignified streak, but their soft side, too, after a mission trip to the Congo.
Jang Dong-gun and Kim Min-jong recently returned from the poverty-stricken nation and said that they were moved by what they saw there.

On a trip co-hosted by Unicef and UNHCR’s World Food Program, the two actors spent time with kids and refugees in the Congo area.

“The poverty was worse than I feared,” said Jang. “One mother was so malnourished and couldn’t breastfeed, so she would chew on leaves to get nutrition for her kid.”

Kim also said that he was shocked “to visit a continent that felt so far away from where I was.”
Regardless, Kim said his visit opened his eyes up to the fact that, “Korea received a lot of aid after the war, so it’s about time we helped out others in need.”

The pair’s visit will be televised as an SBS documentary through the program “Hope TV” on Nov. 16.