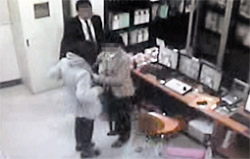 A 37-year-old security guard surnamed Lee working at a branch of the retail giant Homeplus in Seoul spotted a woman shoplifting food worth 10,000 won ($9.19) in October of last year.

What should have happened next, turning her over to the proper authorities, however, turned into a case of blackmail.

Instead of calling the police, Lee and two of his fellow guards demanded the woman pay for her illegal act, but the penalty they imposed was far more than what the police would have fined her.

They threatened that they would report her to the police and also shame her to her family if she refused to pay them 3 million won.

The Seoul Metropolitan Police Agency said yesterday it rounded up 51 security guards employed by the nation’s second-largest supermarket chain and arrested three chief guards on charges of blackmailing shoplifters for over 1 million won each time, raking in nearly 200 million won from about 130 victims over a two-year period, from July 2010 until July this year.

The 51 suspected guards are reportedly from three security companies working at 10 Homeplus branches in Seoul, Incheon and other areas in Gyeonggi. The police also booked 13 heads of Homeplus branches and four employers at the group’s headquarters without physical detention for violating laws related to guard activity by tacitly permitting such illegal activities.

The investigators said that of the total amount of 200 million won extorted by the suspects, 150 million won was allegedly used by Homeplus branch heads to cover losses incurred by other thefts or damage done to store goods. The remaining 50 million won was shared among the three arrested chief guards who oversaw the alleged blackmail operation.

The retail giant flatly denied its involvement, claiming they “were not even aware of the illegal practice by a security firm” and “the case only involves members of the troubled security firms,” according to an official at the retail store, who spoke on the condition of anonymity.

“We have confirmed the illegal practices by heads of some Homeplus branches who covered some losses stemming from stolen goods with the settlement money received from shoplifters,” said Choi Jong-hyuk, chief of the crime section at the Seoul police agency in his counter to the claim by the retailer. “The claim that the store was not aware of the illegal activities does not make sense.”

Homeplus said in its statement released yesterday it will break contracts with security firms should they find illegal activity once the investigation is complete.