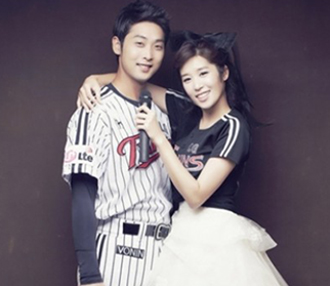 Another athlete-TV personality couple has decided to take the leap next month as baseball player Seo Dong-wook will marry newscaster Joo Min-hee on Dec. 8.

I Wedding released pictures of the two’s studio shots yesterday in advance of what is to be a private event at Patio 9 wedding hall in Gangnam, southern Seoul.

“I’m so excited at the prospect of settling down, but also nervous at the thought of taking on such a responsibility,” said the LG Twins infielder. “I look forward to this next chapter of my life as well as next season with my faithful supporter and wife-to-be by my side.”

Joo issued a similar statement, saying, “As an athlete’s wife, I’ll be the best homemaker, and at work, I’ll be give it my all to become a TV personality who portrays a healthy image.”

The couple met in 2003 through Kia Tigers Player Cho Tae-soo, who was Seo’s roomie at the time and Joo’s elementary school classmate.

Apparently it was love at first sight for Seo, and he asked Cho for Joo’s number and pursued her.