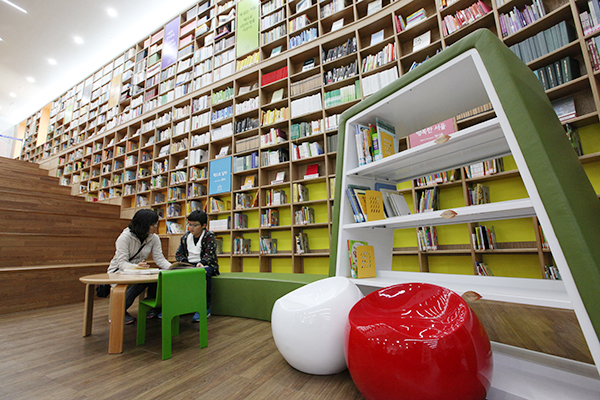 Opened late last month, the Seoul Metropolitan Library at City Hall was an immediate hit. Visitors are able to read at huge and spacious stairs right next to 5-meter (16-foot) bookshelves. [JoongAng Ilbo]


Libraries have always been removed from daily life in Korea.

“It is hard to find accessible libraries because of the high cost of property and rents in Seoul,” says Kang Ye-rin, an architect and co-author of the recently released book “People Who Take a Walk in Libraries.”

Kang and Lee Chi-hun, her co-author and also an architect, visited 30 libraries across the nation, and the book is the result of two years of research.

“Cities were developed first in Korea and libraries were added later. For this reason, most libraries are located in less accessible green areas and that it makes it hard for people to get there by public transportation,” says Kang.

These days, however, libraries are changing. Starting with the newly opened Seoul Metropolitan Library located at City Hall, libraries are becoming known as more than just places to borrow books. Some rent space for social functions, such as wedding receptions, or offer overnight camps and other activities for children.

And the new Seoul Metropolitan Library is certainly catching on. Within five days of its opening Oct. 26, 70,000 people had registered as members.

During a recent visit to new library, which is located in the old City Hall building, there were people from all walks of life, from seniors in 60s and 70s to young couples to mothers cradling toddlers in their arms.

“I’m here with my son, who wants to watch the Seoul Lantern Festival at Cheonggye Stream,” says Kim Ji-eun, who lives in Songpa District, southern Seoul. “We drop by to read books on our way to the festival. I really like this place. It’s a new building, everything is clean and well organized.” She then enters the title of book she is searching for on one of the library’s computers.

“We used to have to plan ahead to visit libraries because they were quite far away from where I live,” she says. “But it’s good to have this huge library in the central area so that my son and I can drop by whenever we want.”

It takes no more than five minutes to walk from the City Hall subway station to the library, and scores of buses pass through the area all day long.

Seoul Metropolitan Government plans to increase the number of libraries located in or near residential areas to 1,372 by 2030.

Apart from its easy accessibility, the interior of the new downtown library was designed with readers in mind. Instead of placing tables and chairs in a row, there are spacious stairs right next to 5-meter (16-foot) bookshelves where anyone can sit and read.


A book cafe is located on the second floor and a massive amount of old documents relating to Seoul are available. There are sections for the blind, the deaf and foreigners, as well.

If the new City Hall main library shortened the distance for many central-city dwellers, Geulmaru Hanok Children’s Library in Gaebong-dong, southwestern Seoul, intrigues children with the opportunity to visit a hanok. The library built in the style of a hanok, or traditional Korean house style, has a garden and a space where children can experience hanok life.

The National Library of Korea, located in Banpo-dong, southern Seoul, rents its conference hall to couples who want to walk down the aisle at a reasonable price.

“The first wedding took place in July last year,” says Cho Su-yeon, who works as part of a public relations team at the library. “Most public organizations close on the weekend, but we wanted to make the best use of the space.”

Geum Sang-hun, who is responsible for renting the conference hall, says it costs 59,000 won ($51) for three hours. The hall accommodates as many as 240 people.

Rental fees vary depending on location, but range from 200,000 won to 3 million per hour for a wedding venue.

“There’s only one wedding a day, which is good for your privacy. You can also hold a wedding reception at a library cafeteria,” says Geum.

Seven more couples plan to get married at the library by the end of this year, and 18 couples have already booked their big days for next year.

Programs such as quiz shows, film screenings and treasure hunts are part of the program, most of which are available only during winter and summer vacation periods.

“Today, libraries mean more than a space where you read,” says Lee, the author and architect.

“They sometimes function as a park, lounge, concert hall or cafe. Some libraries also have kitchens, so its users can practice what they’ve learned from cookbooks.”