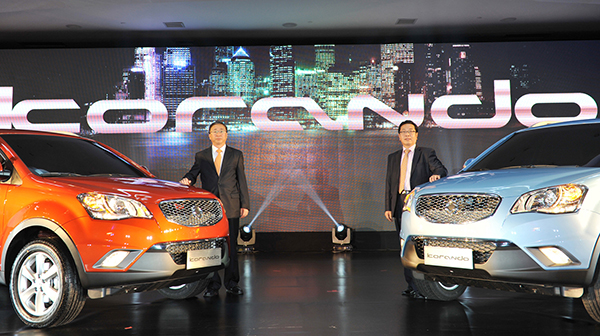 
Ssangyong Motor is looking to boost its sales in China as the automaker prepares to sell its gasoline-powered Korando C in the world’s largest auto market from Monday.

Korea’s smallest automaker said yesterday it held a launching ceremony for the compact SUV in Zhangjiajie, in China’s Hunan Province, on Thursday with more than 200 guests in attendance.

“The company reinforced its lineup in China by launching the gasoline-powered Korando C,” Lim Seok-ho, senior executive director of Ssangyong’s overseas sales division, said at the event. “We will make an all-out effort to achieve our mid- and long-term targets based on sales increases in China.”

The new Korando C is equipped with an e-XGi 2.0-liter engine that can generate maximum output of 149 horsepower and torque of 20.1 kilogram-meter. It was first unveiled to the public at the Paris Motor Show in September, but its introduction in China marks the first event held for the new model in Asia.

Ssangyong said it expects the gasoline-fueled version to sell well in China, where the SUV market grew at an annual rate of 54 percent from 2008 to 2011, according to the company.

The affiliate of India-based Mahindra Group plans to focus on marketing the model’s European-style design and powerful four-wheel drive system.

Ssangyong has been making efforts to expand its sales in China recently. It signed a contract with Pang Da Automobile Trade, the largest auto importer and distributor in China, in June last year and introduced the diesel-powered Korando C a few months later in September. It also introduced a local version of the Chairman W, a luxury sedan, at the Beijing Motor Show this April.

Ssangyong said it has set its 2013 sales target for China at over 10,000 vehicles, which includes sales of the petrol Korando C. The company hopes its China sales account for 20 percent of total overseas sales by 2013. Currently, China revenue makes up 7 percent.

“We will strengthen China sales by expanding the number of dealerships from 80 to 150 by the end of next year,” the company said in a statement.

It has also been moving to strengthen sales in other Asian countries. Last month, it launched its Rexton W premium SUV in India in a tie-up with its affiliate Mahindra.

Ssangyong said 400 units were pre-ordered within three weeks of its launch and this is added seven more Indian cities to its sales territory based on expected sales.