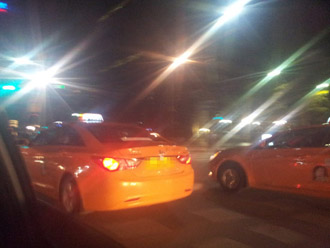 With legislation to designate taxis as public transportation, alongside buses and subways, in process at the National Assembly, bus drivers, unions and companies raised a loud outcry, threatening a nationwide strike this week.

The National Association of Bus Companies stated yesterday that it will hold an emergency meeting tomorrow with representatives of the nation’s 17 cities and provinces to discuss countermeasures against passing the bill, conceding that while taxis do need more support, designating them as public transportation is not an option.

It will further discuss a nationwide bus strike if lawmakers do not retract the draft bill to designate taxis as public transportation.

If the National Assembly passes the bill, taxis will be able receive the same subsidies from the national and local government that buses and subways receive.

All that is left is for the draft bill to receive approval by the Legislation and Judiciary committee on Wednesday, which will then need to pass the National Assembly on Friday.

“Despite the opposition of lawmakers, transportation experts and the bus industry, both ruling and opposition parties in order to garner votes ahead of elections ignored the government and bus industry’s voice and [the Land, Transport and Maritime Affairs Committee] passed the unprecedented draft bill enabling taxis to be included as public transportation,” stated the national bus association spokesman at the National Assembly last week, requesting that the draft bill be promptly withdrawn.

Among various perks, in case of a deficit in operational profits, taxi companies will be eligible for subsidies by the government, and they will be also eligible to offer discounts to transferring passengers, which will be in turn subsidized by the national and district governments.

Taxis have especially long-coveted the bus-only central lanes, which they will be able to use if they are classified as public transportation. They will also be able to access public parking lots for buses. Buses have expressed that taxis using their lanes will clutter and block speedy commute.

“In a situation where the budget is limited, if taxis begin receiving government support, the subsidies for buses and subways will subsequently have to be decreased,” said Kim Jung-hoon, a head of the national bus association.

“If that happens, that can only be resolved in a price hike, which will result in unhappy passengers.”