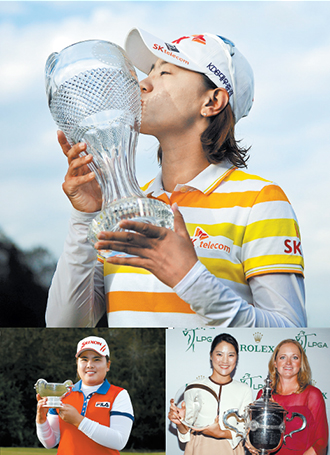 Choi Na-yeon, top, kisses her trophy after winning the LPGA Titleholders golf tournament Sunday. Park In-bee, bottom left, won the Vare Trophy for having the tour’s best average score and was the top money winner with earnings of 2.29 million dollar. Ryu So-yeon and Stacy Lewis were honored as Rolex rookie and player of the year, respectively. [AP, AFP/YONHAP]

After a strong season in which they won some major tournaments on the LPGA Tour, Korean golfers ended the season on a high note as Choi Na-yeon won the finale on Sunday and Park In-bee was the year’s top money winner.

Choi carded a 14-under 272 at the four-round CME Group Titleholders at TwinEagles Country Club in Naples, Florida, including a two-under 70 on Sunday, beating compatriot Ryu So-yeon by two strokes.

It was the second victory of the season for the 25-year-old Choi, who won the U.S. Women’s Open in July, and the seventh of her LPGA career. With the $500,000 top prize money, she lifted her season earnings to a career high $1.9 million.

“I feel really great,” Choi told a post-game press conference on Sunday, according to the official LPGA Web site. “And I was really satisfied with how I played, not just this week, but all season.”

Park defended her leading position on the money list with an 11th-place tie to hold off a tenacious challenge by 2012 Player of the Year Stacy Lewis of the United States, who was tied for 29th at Twin Eagles.

Park finished with $2.29 million, joining Annika Sorenstam, Lorena Ochoa and Yani Tseng as the only LPGA golfers to top $2 million.

Park also received the Vare Trophy for best average score, the fourth Korean to win the honor after Pak Se-ri in 2003, Park Ji-eun (Grace Park) in 2004 and Choi in 2010.

She is the second Korean to win the money title and Vare Trophy in the same year. Choi did it in 2010.

“I mean, it means a lot,” said Park. “We had a tight race until the last tournament and the last round. I put a lot of pressure on myself this week and it was really hard.

“This week felt like it was longer than the whole season. I’m really happy that it’s finally done and I got the title, really proud of myself, and this is the best year I’ve had.”

Ryu, who received the LPGA Rookie of the Year award before Sunday’s final round, finished in the top 10 in a tour-best 65 percent of the tournaments she entered. She won the U.S. Women’s Open last year as a non-regular member and made a full-time appearance on the circuit this year, including her second LPGA victory at the Jamie Farr Toledo Classic in August.

“Winning the U.S. Women’s Open last year as a non-member was a really huge thing for me, but I worried some people might think it was just one lucky win,” Ryu said. “That was a huge pressure on me, so I set a goal to win this award and add another trophy. I’m so proud to be the eighth Korean to win the Rookie of the Year.”

Koreans won three of the four majors: Yoo Sun-young at the Kraft Nabisco Championship in April, Choi at the U.S. Open in July and Shin at the British Open in September. In July, Park won the Evian Masters, which next year will become the fifth major.

In Sunday’s final in Florida, there were a few tense moments early, particularly on the third hole, that put the tournament up for grabs.

Choi pulled her approach 30 yards left of the green, surrounded by steep slopes. Her chip failed to reach the green, and she two-putted for double bogey. There was a four-way tie for the lead among Choi, Ryu, Brittany Lincicome and Ai Miyazato, with Karrie Webb only one shot off the pace.

Moments later, Choi regained the lead with a 3-wood from 240 yards that landed 20 yards short of the green and bounced onto the putting surface, rolled next to the flag and stopped just inside 10 feet away. She holed that for eagle and never trailed again.

Ryu took on a front bunker with a tee shot to 10 feet for birdie on the 12th, but Choi followed with a 9-iron to within 3 feet. Choi struggled with her irons, particularly wedges into the par 5s on the back nine, but she came up big with the toughest one of all.

“Leading the tournament, there’s always extra pressure. Even on the front nine, when I had the double bogey and was tied for first place, I felt more comfortable than leading,” said Choi. “I like chasing somebody, then I can play more aggressive.”

She was aggressive until she tapped in for par on the final hole. It put a smile on her face as she heads to Orlando for house-hunting.