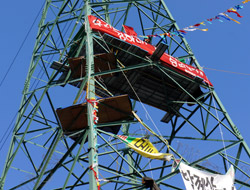 A protest staged by two auto workers on a transmission tower overlooking Hyundai Motor’s Ulsan plant has now gone on for over a month, raising worries that it will become a prolonged strike with no end in sight.

Choi Byeong-seung, an in-house subcontract worker for the automaker until he was laid off in 2005 for joining a strike, and Chun Ui-bong, an official of Hyundai Motor’s temporary workers’ union, climbed up a 50-meter (164-feet) electrical pole on Oct. 17, demanding the auto giant immediately give 13,000 temporary workers at the plant, including cafeteria workers and janitors, full-time status.

The two strikers set up a platform halfway up the tower made out of 18 iron panels that were 2.3 meters thick, bearing through sweeping winds and rain.

During their over-a-month stay on the pole, they use ropes to bring up food and hand down their excrement in plastic bags to around 50 sub-contract workers supporting their protest.

The world’s fifth-largest automaker with affiliate Kia Motors refused to accept their demands and stated it instead will gradually switch about 3,000 temporary workers into regular workers by 2015.

The workers on strike base their demand on a ruling by the Supreme Court given in February of last year. The court stated the laid-off Choi should be hired directly by Hyundai Motor, not the automaker’s subcontractor, as he had worked more than two years at a car parts assembly line for the automaker.

The temporary workers’ union cites the ruling in their argument that Choi as well as other subcontracted workers should be given full-time status as the labor law stipulates firms are required to give full-time status to irregular workers after their two-year service.

The carmaker, however, counters the claim by citing the Ulsan District Court’s judgment handed down last month, which says in its ruling that Choi’s case should not be extended to other temporary workers at the Ulsan plant.

The nation’s top automaker claims that it is not bound by labor law to turn those 13,000 irregular workers into regular positions after two years on the job as they are not hired by the original contractor, Hyundai Motor, but by its subcontractors.