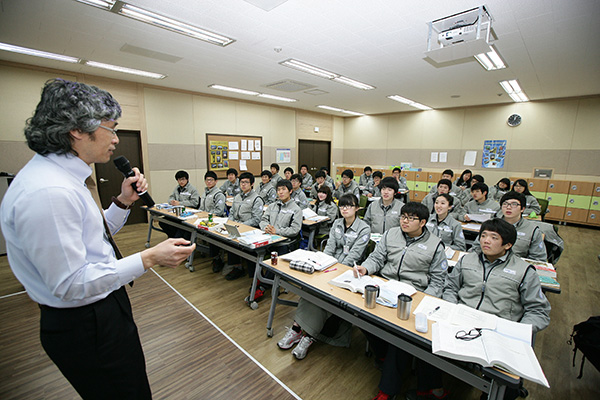 The company will begin accepting applications on Monday and is planning to recruit about 100 people. All high school graduates are eligible, regardless of the type of school they attended.

Applications will be available until Dec. 7 on the DSME Heavy Industries Academy Web site at http://dhia.dsme.co.kr. Those who pass an initial document review will be invited for a test and interview. Successful candidates are meant to start at the institute from early next year.

As recruiting has picked up, so has recognition of the company’s training institute. In October, the academy received official approval from the Ministry of Education, Science and Technology. It will offer two separate programs to applicants: DSME Engineering College and a planning and production management course.

Scores from the 2013 College Scholastic Aptitude Test are a prerequisite for applications to the comprehensive engineering college. The institute’s curriculum is broad and includes topics such as basic planning and engineering as well as liberal arts like English and history.

During the first year of the program, students receive collective group training and are encouraged to work together to progress toward academic goals. Those with high GPAs and positive attitudes about their schoolwork will be supported by the company to receive bachelor’s degrees in their fields of expertise.

Unlike the engineering college, the planning and production management course is open to students who have not taken the College Scholastic Aptitude Test as it is a vocational program. Students in that program will be taught by DSME in classes that include on-the-job training to learn field jobs and later advance to positions as planning engineers and project management experts.

After seven years of study and successful work at DSME, graduates of the program will be permitted to obtain the same rank as that assigned to employees who are recent university graduates.

The education work done by DSME, which began last year, is unusual in Korea as most companies focus on recruiting university graduates. But DSME decided to follow in the footsteps of American and European companies by giving equal employment and training opportunities to high school graduates without university degrees. This is the first time that a major company in Korea has made this decision.

With the official approval of the academy as a college, DSME will introduce more organized education programs to train experts in the heavy industries who will able to compete with employees of international corporations at the global level.

“If the students complete all the courses planned by the company, they will become shipbuilding and marine industry experts who are more competitive in field experience compared to university graduates of the same age,” a DSME executive said.

“We hope many talented high school graduates with passion and spirit for challenges will apply for this course.”