Family killed in fire after failing to pay electric bill

Family killed in fire after failing to pay electric bill 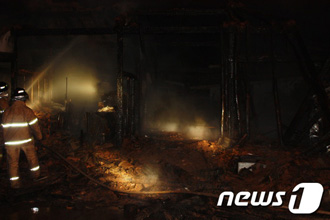 A family whose electricity was cut off due to unpaid bills was killed in a fire that is assumed to be started by candles they were using to see in the dark.

Goheung Police in South Jeolla Province said a fire broke out at 3:48 a.m. yesterday in the house of an elderly man surnamed Joo, 60, killing his wife surnamed Kim, 58, and her 6-year-old grandson.

Joo is currently in the hospital for facial burns. The fire was put out an hour after it started, but Joo’s wooden house was gutted.

The police haven’t determined the exact cause of the fire. They suspect candles that the family was using for months as an alternative to lights might have caused the fire.

“Around 3 a.m., our grandson woke my wife up and said that he wanted to go to the bathroom,” Joo was quoted as saying to the police.

“So my wife lit a candle and helped our grandson use a chamber pot near our bedding. We fell asleep again, but I soon realized that my head was on fire. I barely escaped the house and asked my neighbors to call firefighters, but it was too late to save my grandson and wife.”

The police said the Goheung branch of the Korea Electric Power Corporation installed a current limiter on the house on Oct. 30 because they did not pay the 157,740 won ($145.60) bill that was overdue for six months.

Under the regulation, if an electrical bill hasn’t been paid for three months, a current limiter will be installed on the power supply cable. Once a current limiter is installed, if the momentary usage exceeds 220 watts, the electricity supply will be cut off automatically.

The police explained that people can use two or three fluorescent lights, a television and a refrigerator simultaneously within 220 watts, but usage exceeds the limit easily if they use heating systems that demand a high amount of energy use, such as an electric heating pad or an electric rice cooker.

It added that 6,777 houses nationwide are having similar problems.

“We assume that the family has been using candles for a long time,” said Shin Seong-rae, chief investigator of the Goheung Police.

The police said Joo took the boy in to help his daughter because she isn’t financially stable enough to raise a child.

Joo wasn’t able to receive any subsidies for basic living due to his age. Under the law, the government provides subsidies to people who are 65 and older and incapable to work.

He had worked as a daily worker in public offices but had to quit working in June last year due to knee problems he developed after a traffic accident.

The police said Kim, Joo’s wife, was the breadwinner of the family. She has been working at a citron factory as a day worker.

The police said they also have not been using any heating for the house since last month due to financial problems.

They also failed to pay their phone bills.

“I couldn’t see my boy often due to my current money conditions,” Joo, 27, the mother of the boy said.