Documentary is a self-examination of Korea’s stifling movie industry

Documentary is a self-examination of Korea’s stifling movie industry 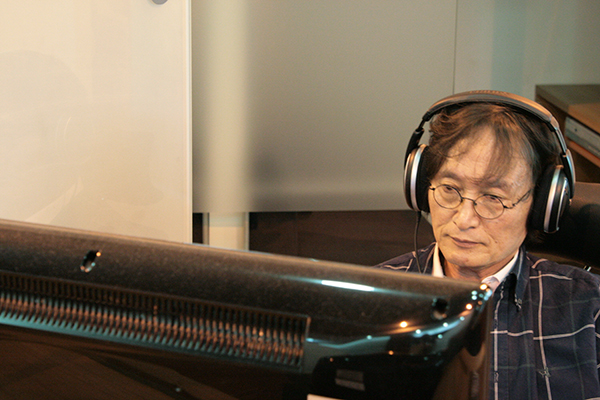 
In “Ari Ari the Korean Cinema,” there are no heroes, lovers or bad guys, no fights or car chases.

The debut documentary film by Heo Chul features more than a hundred respected film professionals talking about themselves and the industry they love.

There are directors Park Chan-wook of “Oldboy,” Bong Joon-ho of “The Host” and Kim Ji-woon of “The Chaser,” along with veteran actors Ahn Sung-ki, Park Joong-hoon and Kim Hye-soo.

These industry luminaries candidly discuss the challenges facing the Korean movie industry: big conglomerates’ tight grip on investment and distribution and the discrepancy between corporate-backed films and independent art-house movies. Such issues are prompting unprecedented soul-searching in an industry that drew more than 100 million viewers this year for the first time.

In the documentary, actress Yoon Jin-seo and director Chung Ji-young set out to interview industry people and the conversation often takes place in a casual manner over drinking or coffee.

Heo is no stranger to analysis and observation, having studied art and communication in the United States. He holds a master’s degree from Brooklyn College and a Ph.D. from the University of Iowa.

“In New York, there is at least some people and places that would invest in small independent films and put them on screens. But in Korea, the chance of that happening is slim,” Heo said during a press conference on Wednesday. “Ari Ari the Korean Cinema” is scheduled to be released Dec. 6. 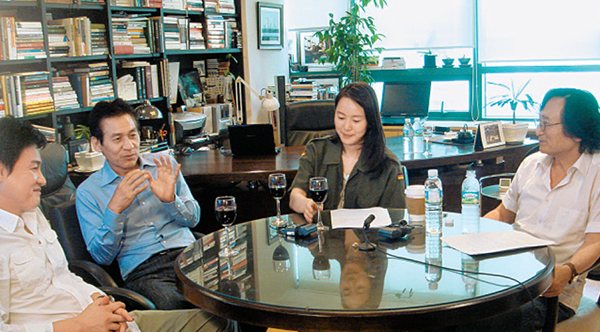 
When he returned to Korea, Heo saw directors and actors struggling in a system controlled by some big players, and he was inspired to make a documentary feature concerning issues looming over the Korean movie scene.

“When I came to Korea, I met director Chung, who had not produced a movie for 13 years, and actress Yoon, who was dogged by a fear of an uncertain future,” he said.

Chung Ji-young, who directed “Unbowed” and “Namyeong-dong 1985,” movies with strong social commentary, expressed concern for the growing influence of a small cadre of big corporate players.

“There is virtually no place or money for low-budget art movies,” said the 66-year-old director. “We need to change the existing system where conglomerates control the entire process - from investment and distribution to screening.

“If we just let the film industry operate according to the free market system, it will be less diverse and threaten integrity. We need to come up with a policy that can support so-called small movies.”

To its credit, the upcoming documentary goes beyond chaebol bashing in an attempt to get at the heart of the problem.

In one scene, a director recalls when he had to “deliver a presentation” on his movie to corporate chiefs in charge of investment. 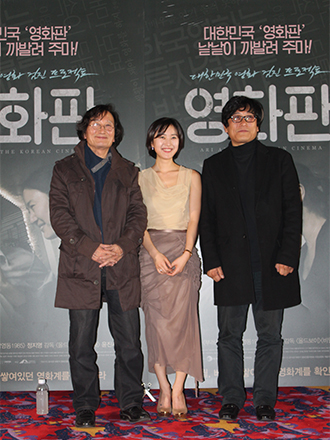 Importantly, the movie also gives voice to those with different points of view. Representatives from CJ E&M and Lotte Entertainment, two of the biggest industry players by market share, offer their perspectives.

“Ari Ari the Korean Cinema” also looks back at the history of Korean cinema. While a majority of people today may equate the domestic movie industry with a handful of hits such as “Oldboy” and Kang Je-gyu’s “Shiri,” many insiders trace the roots of Korean film to the 1960s, which the documentary describes as “the Golden Age.”

A dark era was the 1970s and 1980s, when movies were made under strict censorship by the military authoritarian regimes of Park Chung Hee and Chun Doo Hwan.

The documentary also examines films of the 1990s, in particular, those made under the civilian administration of Kim Young-sam.

“Ari Ari the Korean Cinema” also provides commentary by independent movie makers and the challenges and obstacles they face under the current system.

Overall, the film explores the gradual transformation from a small, family-like film industry into an entertainment business dominated by corporate behemoths.

Despite what must be considered a pessimistic portrayal of the current state of Korean cinema, the documentary ends with a positive outlook. “Korean-style passion and madness” will keep the Korean film industry alive, seems to be the consensus.

“I think that both director Chung and I hold out hope,” said Heo.

“Chung managed to produce his movie ‘Unbowed’ after 13 years and it was well received. It’s kind of a glimmer of hope.”