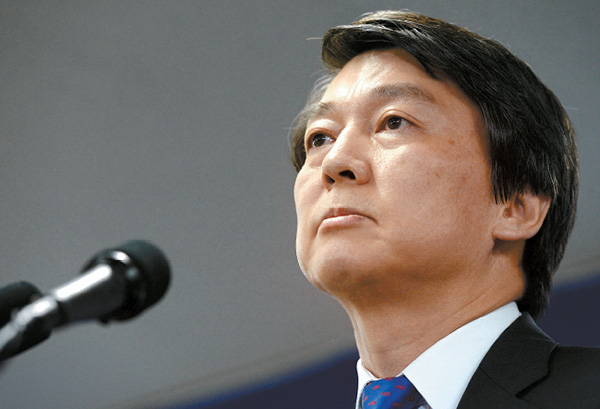 Independent candidate Ahn Cheol-soo announces he will withdraw his bid for presidential candidacy yesterday at a press conference at his campaign office in Gongpyeong-dong, central Seoul. [NEWSIS]

Ahn convened an emergency press meeting at 8:20 p.m. yesterday, after a 10-day-long negotiation between the two candidates over how to merge their campaigns in order to defeat the ruling party’s Park Geun-hye.

“At this moment, Moon or I have to consolidate our candidacy,” Ahn said. “I previously promised you that I will realize the candidacy merger by putting myself totally on the line.

“I will give up my candidacy,” he said, with a quivering voice.

Since the two camps started their negotiation over the method to unify their candidacies from Nov. 13, they had struggled to reach an agreement on details, particularly on how to word opinion poll questions.

“The method for the merger should meet the people’s expectation,” Ahn said. “However, Moon and I couldn’t narrow down our differences. My last proposal couldn’t lead to an agreement.

“I don’t think it benefits the people to fight over the merger,” Ahn said. “I declare that I will continue my own fight for the transition of the administration [from the ruling party to the opposition] without any title.”

After Wednesday’s televised debate, the two candidates and their aides had negotiations over the specifics on a general public opinion poll to determine who should drop out of the race. Although they both made a string of proposals, they each turned down their rival’s ideas and the negotiation dragged on.

They mainly clashed over how to word the poll questions. They said a slight change in wording could make a difference in outcome.

While the two camps didn’t make any progress, a group of renowned liberal intellectuals convened a press conference on Thursday and publicly asked them to combine the two camps’ demands equally.

Although Moon didn’t like Ahn’s questions, they accepted the proposal.

However, Ahn’s camp said it wouldn’t accept it and made another proposal on its own. They basically agreed to mix the two candidates’ questions 50-50.

But they didn’t like Moon’s question, so they revised it to say, “Which candidate do you support between Moon and Ahn?”

Moon turned that down.

“We thought reaching an agreement on the opinion poll was actually impossible,” Yoo Min-young, a spokesman of Ahn, said at a briefing yesterday before Ahn’s announcement. 