Rep gets a suspended term over bribe scandal

Rep gets a suspended term over bribe scandal 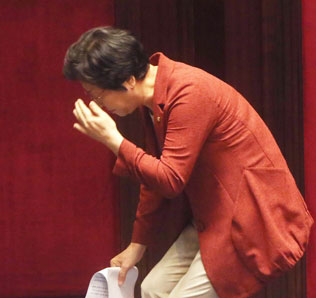 Hyun Young-hee, an independent lawmaker who was formerly affiliated with the ruling Saenuri Party, faces expulsion from the National Assembly as she received a suspended prison term yesterday for bribing her way into the legislature.

Hyun was charged with giving 50 million won ($46,029) to a former ruling party official, Cho Ki-moon, in return for securing her a spot on the proportional representation ticket ahead of the April general elections.

Hyun was expelled from the party in August as the criminal investigation into the money-for-nomination scandal dealt a blow to the party ahead of the crucial December presidential election.

The Busan District Court sentenced Hyun to two years in prison, suspended for three years, and also ordered asset forfeiture worth 48 million won. She was also ordered to pay 3 million in fines for separate election violations.

The ruling, if upheld by the top court, could strip Hyun of her Assembly post. Under the current election law, a jail sentence or a fine of more than 1 million won results in the loss of a lawmaker’s parliamentary seat.

Yoon Young-seok, another sitting legislator of the party, was sentenced to six months in prison, suspended for one year, for pledging to give 300 million won to Cho in return for his help in the nomination for the April elections.

The court also handed down a suspended prison term for Cho, who worked at the Saenuri Party’s branch office in the southern port city of Busan. Yonhap