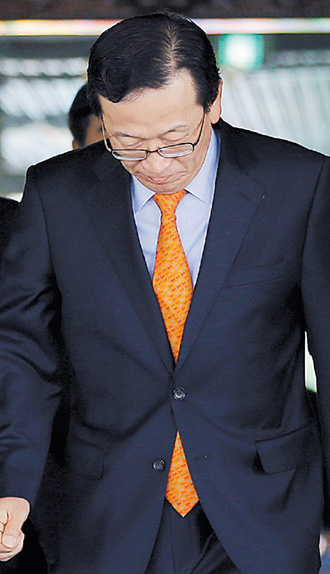 Seok Dong-hyeon, chief prosecutor of the Seoul Eastern District Prosecutors’ Office, leaves the office yesterday after announcing his resignation to take responsibility for his failure to properly manage the organization. [YONHAP]

Yoon was accused of 15 counts of stealing from department stores and Jeon was in charge of the case.

Jeon is a first-generation graduate of the law school system, which was implemented in 2009, commissioned as a prosecutor to Gwangju District Prosecutors’ Office in March and has been participating in a three-month training program in Seoul as an acting prosecutor.

The prosecution said Yoon’s attorney has reported Jeon to the inspection department of the Supreme Prosecutors’ Office.

“The attorney said there was more than one sexual contact between his client and Jeon when she was under investigation,” Lee Joon-ho, director of the inspection department of the Supreme Prosecutors’ Office, told reporters.

The prosecution will examine whether Jeon demanded that Yoon have sex with him in return for covering up the case. The prosecutor claims that the sex was consensual.

But sources said that the prosecution doubts Jeon’s testimony as it found that Yoon visited a counseling center for victims of sexual violence in Seoul several times before the prosecution began the inspection.

When the incident was reported to the prosecution, Jeon and Yoon agreed not to press any further charges as Jeon paid 50 million won ($46,000) in settlement money.

Jeon told the prosecution that Yoon demanded the money, but Yoon insisted that Jeon offered the money to keep her quiet.

The inspection department temporarily suspended Jeon from his office on Thursday and sent him to the Legal Research and Training Institute in Yongin, Gyeonggi, yesterday.

It said it will check whether the command of the Seoul Eastern District Prosecutors’ Office neglected its duty in managing entry-level prosecutors.

“Jeon admitted the sex,” a prosecutor who participated in a probe against Jeon said.

“He said that Yoon pleaded for favorable handling of her case because she has many children. She called the prosecutor three days later and they had sex at a motel near Jeon’s office.”

As another incumbent prosecutor is involved in an inappropriate scandal, the prosecution couldn’t hide its embarrassment.

The case was unveiled only three days after Prosecutor General Han Sang-dae made a public apology over Kim Gwang-jun, a senior prosecutor of the Seoul High Prosecutors’ Office, who is suspected of taking about 970 million won in bribes from Eugene Group and Cho Hee-pal, a pyramid scheme con man, in return for covering up their irregularities. Seok Dong-hyeon, chief prosecutor of the Seoul Eastern District Prosecutors’ Office, yesterday announced his resignation to take responsibility for his failure to properly manage the organization.

“As the chief manager of the office, I am strongly responsible for this incident,” Seok told reporters. “The dignity of the prosecution has been lost. As soon as I was informed about the incident, the prosecution did its best to handle it, but I judge that someone must take responsibility.”