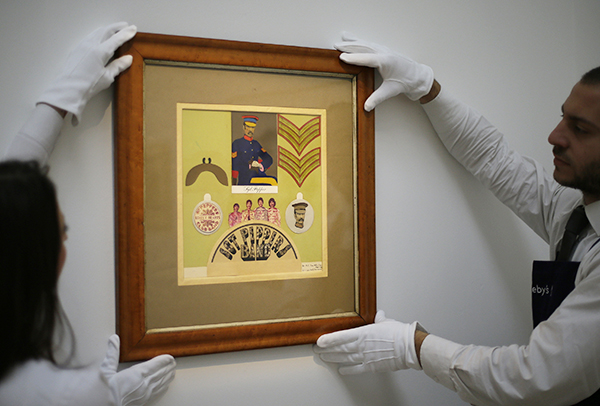 
LONDON - Pop music loves him. The art establishment shuns him. At the age of 80, British artist Peter Blake is revered for his celebrated “Sgt. Pepper” Beatles album cover yet at the same time dismissed as too “cheerful” to be one of the greats.

Regularly stroking his wispy silver beard and supported by a walking cane, the man dubbed the “godfather of pop art” still struggles to come to terms with his place in contemporary culture.

“It’s a cross I bear,” he said of the fact that his art is not taken as seriously as that of some contemporaries.

“Perhaps it’s surprising that at my kind of age and with my infirmities I’m still cheerful,” he said at the Waddington Custot Galleries, where his latest show, “Rock, Paper, Scissors,” just opened.

Surrounding him are works ranging from some of his earliest watercolors executed in 1948 when he was 16 to “The Family,” a sculpture he completed just a few days ago.

What is striking is just how lively they are - plastic figures of Snow White and 30 dwarves crowd outside a model of a Swiss chalet in one humorous work and the six-foot-long “A Parade for Saul Steinberg” is a model bursting with color and references to popular culture.

Blake concedes he is often left having to defend his work in a world where “serious” art is cherished above all. “Painters all have different reasons to paint - it could be politics, it could be angst, it could be anger. My reason for painting is to make magic and to make cheerful things.”

He has compared himself to contemporaries like Frank Auerbach, 81, whose dark oil paintings are increasingly sought after by collectors.

“Compared to that I am light, I have to accept that,” Blake said, adding he is a great admirer of Auerbach. “It is the reason I am quite often aesthetically undervalued.”

More of a disappointment is being overlooked by Tate Modern, the most important British gallery for modern and contemporary art, which, ironically, gave a major retrospective this year to a much younger artist whom Blake helped nurture - Damien Hirst.

After uttering a few choice words in what he himself called a “rant” to a newspaper against influential Tate director Nicholas Serota, he sought to strike a more conciliatory tone.

“Oddly enough, Serota came in earlier to see the show,” Blake recalled. “I said, ‘Look it’s not personal. You’re the director of the Tate .?.?. and if I don’t fit into your scheme, I’m not that bitter about it. It’s a fact. I don’t hate you.

“I think he was slightly embarrassed because I have been quite voluble about it. He accepted it.”