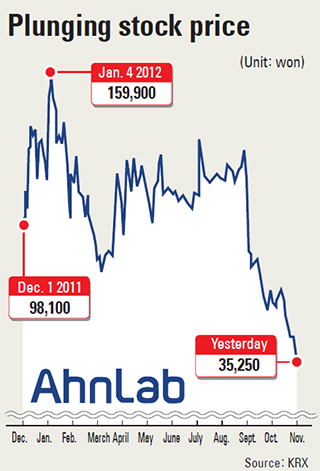 The fate of politically themed stocks linked to the three presidential candidates was divided yesterday, with those related to independent Ahn Cheol-soo falling after he announced his withdrawal from the presidential race late on Friday after the market had closed.

AhnLab’s market cap plunged from a previous high of fourth place to 49th on the Kospi yesterday. It stood at 1.67 trillion won on Jan. 4, when the stock price hit a record high of 159,900 won, but plummeted to 352.9 billion won as of yesterday.

Two other stocks related to Ahn, including Sunny Electronic and Mirae Corporation, fell by almost the daily limit of 15 percent from Friday.

“The collapse of themed stocks related to Ahn was to be expected,” said an analyst at a local brokerage. “AhnLab’s price soared in tandem with his presidential prospects rather than having anything to do with the company’s performance or fundamentals. It is likely to keep going down.”

Another analyst suggested the shock could be minimized if Ahn is named as prime minister in the upcoming administration, but political observers admit the chances of him now being appointed are slim.

Meanwhile, stocks linked to Park Geun-hye of the ruling Saenuri Party and Moon Jae-in of the DUP surged as the election thinned out to a two-horse race.

Barunson, a local stationery maker linked to Moon, closed at 4,080 won, up 14.93 percent from Friday. Barunson is one of the most high-profile companies known to have received legal consultation from a firm Moon formerly worked for.

Shares of Agabang & Company, which makes clothes for toddlers, rose by 14.71 percent to end at 11,700 won. Agabang popped up on investors’ radars after Park expressed her will to tackle the nation’s low birthrate.

Experts warned of an impending collapse of themed stocks tied to Park and Moon.

“This is the last chance for investors to escape falling victim to a number of bubbles that are about to burst,” said an official at the Financial Supervisory Service. “Investors must target stocks based on companies’ fundamentals.”