Persuading undecided voters who once backed independent candidate Ahn Cheol-soo and winning the swing vote regions in southern provinces emerged as new challenges for the major candidates in the crucial weeks ahead of the Dec. 19 presidential election.

After Ahn announced Friday his decision to drop out of the race, the upcoming election quickly transformed into a match between the conservative Saenuri Party’s Park Geun-hye and the liberal Democratic United Party’s Moon Jae-in.

As their competition intensifies, surveys conducted following Ahn’s exit showed that a large number of his supporters are now undecided, rather than supporting Moon’s campaign. 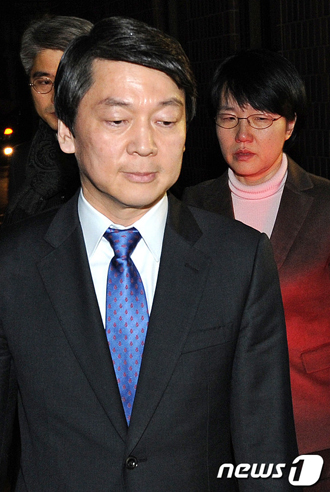 According to the JoongAng Sunday and Embrain’s joint survey on Saturday, only 55 percent of Ahn’s supporters moved to back Moon. In the two-way race between Park and Moon, 9.9 percent said they are undecided.

In another survey by the JoongAng Ilbo on Saturday, the undecided voters went up from 5 percent to 12.3 percent following Ahn’s exit.

Persuading the undecided voters, often centrists, has become a crucial challenge for Park and Moon because neither of them is leading the race by a large margin.

The swing votes in the so-called “PK” region, comprising Busan, Ulsan and South Gyeongsang province, and also the Chungcheong region emerged as a crucial factor. The PK region used to be considered the stronghold of the Grand National Party - the predecessor of the Saenuri Party - but Roh Moo-hyun managed to score 29 percent in the PK in 2002, proving that conservatives no longer have automatic support in the region.

Since Moon is a native of Geoje, South Gyeongsang, and the former liberal contender Ahn is from Busan, the liberals have high hopes to take the region in the upcoming election.

Moon already made a costly pledge during his visit to Busan on Nov. 14 that he will build a new airport in the area to boost the local economy if he is elected. He also planned to launch his official presidential campaign in Busan today.

Park is focusing her efforts on the Chungcheong provinces, known as the traditional swing vote region. She scheduled a trip to Sejong City today to formally kick off her presidential campaign.

While President Lee Myung-bak attempted to scrap the plan to build a mini capital in Sejong City in 2010, Park fought against the administration to push the project forward. The Park campaign, therefore, promotes Sejong City as a symbol of her trust and loyalty.

Voter turnout has also emerged as an important issue as the contest between Park and Moon will also represent a generational battle.

In the JoongAng Ilbo poll, Park won up to 70 percent support from voters older than 50, while she only scored 31.5 percent among voters in their 30s and 27.7 percent in their 20s.

In the current structure, the turnout became more important than ever.

When Roh won the presidential election in 2002, the turnout was 70.8 percent, but the turnout was 62 percent in the 2007 election, in which the conservative Lee won. At the time, the turnout of the young voters was particularly low.

To heighten young voters’ turnout, Moon has been pushing forward a campaign to extend voting hours. While Park wants to keep the current voting hours - from 6 a.m. to 6 p.m., Moon and the liberals argue that it should be extended to 9 p.m.