Another Korean attacked in Australia

Another Korean attacked in Australia 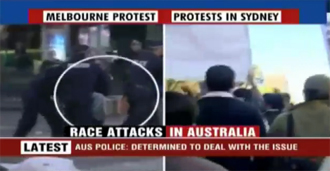 Another Korean was attacked in Australia, raising concerns over whether racial attacks are on the rise.

The latest incident happened in Brisbane, and two similar attacks in September and October, which involved much worse injuries, took place in Melbourne and Sydney.

The victim was a 28-year-old Korean national surnamed Cho who was on a working holiday in Brisbane. According to the Australian police and the victim, two white youths attacked Cho randomly in Runcorn, a suburb of southern Brisbane, when he was on his way home from work as a cleaner at a meat processing factory at 12:30 a.m. Sunday.

“I was walking and talking on the phone and suddenly two white youths in their early 20s approached me and asked to borrow my mobile phone, saying that they wanted to call one of their mothers,” Cho was quoted as saying by Yonhap News Agency. “I felt it was suspicious, but I gave them my cellphone.”

The two strangers tried to take Cho’s phone, he said, and started assaulting him.

According to Cho, the two young men hit him with a blunt instrument and punched him in the face and head, causing severe bleeding. Cho screamed loudly and the two assailants ran to their car, which was parked nearby. Cho was taken to a nearby hospital, received treatment and was questioned by the police.

But according to Cho, the local police weren’t very sympathetic and asked him why he was walking in the streets so late at night, saying, “[Asians] are stupid and silly.”

The Runcorn area is home to many Koreans and Chinese. Many Koreans go to Australia on working holiday visas to earn money while learning English.

“We are trying to verify exactly what happened,” said an official from Seoul’s Ministry of Foreign Affairs and Trade. “We have also asked the Australian police to investigate thoroughly. We would need to have concrete evidence, though, to confirm the incident as a racist crime.”

In September, a 33-year-old Korean student surnamed Chang and a Korean friend were attacked by 10 teenagers at a park near his school in Melbourne. The teens cut off a joint of Chang’s little finger and broke his left arm. Chang was attending a technical school.