Jong-un is cracking down on ‘dissidents’

Jong-un is cracking down on ‘dissidents’ 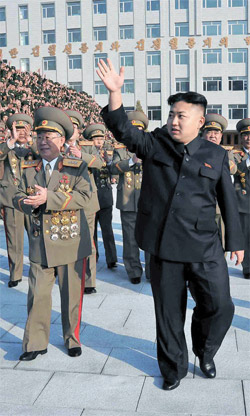 The regime convened a large-scale meeting on Friday in Pyongyang attended by leaders of local police offices to discuss how to hunt down any people threatening national security.

Kim sent a message to the meeting that said: “We must find all of the notorious dissidents, who are hiding a knife behind their backs and waiting for the right timing to trigger a riot, and flatten all of them mercilessly,” KCNA reported.

Kim also ordered enhanced security near giant statues of North Korean founder Kim Il Sung and his son Kim Jong-il astride horses that were unveiled in February, eight weeks after the death of Kim Jong-il, Kim Jong-un’s father. While alive, Kim Jong-il did not allow statues of himself to be erected.

KCNA said in July that a North Korean defector allegedly crossed the border to destroy the statues, abetted by South Korea’s spy agency.

The regime also held a meeting of judges and prosecutors in Pyongyang on Monday, KCNA reported, the first of such meeting in 30 years.

Kim also sent a letter to them, delivered by his secretary, entitled, “How to improve the judiciary and the prosecution.”

“Through improving the judiciary and the prosecution, we can eradicate all crimes and illegal acts and stand the revolutionary order upright in order to push forward with a strong, prosperous nation,” Kim said. “They should strictly deal with anti-state criminals who have bad backgrounds but don’t show it outwardly.”

KCNA also reported that Kim visited the Ministry of State Security on Oct. 7 and again this month, saying that the ministry “should protect people from enemy’s strategies and mercilessly crack down on traitors who have wrong dreams without hesitation.”

“It’s unusual that Kim visited the State Security Ministry twice in 40 days and made a public remark about the possibility of an attack on the statues,” a South Korean government official told the JoongAng Ilbo. “His remarks prove that there have been anti-state acts recently in North Korea and authorities are cracking down.”

Sources told the JoongAng Ilbo that since Kim emerged as the next leader in 2010, high-ranking officials have been dismissed or executed. They include Pak Nam-gi, who led a failed currency reform and who was executed in January 2011; Ri Yong-ho, former chief of the general staff of the army, who stepped down in July 2012; Kim Il-chol, former defense minister of North Korea, who was executed in May 2012 for unknown reasons; U Tong-chuk, former first vice minister of state security, who vanished in March; and Ryu Kyong, deputy director of the State Security Ministry, who was executed in January 2011 on charges of espionage.