Dec. 6 to 12: In celebration of the current King of Thailand Bhumibol Adulyadej’s birthday, the Embassy of Thailand is holding the Authentic Royal Thai Promotion at the hotel’s buffet restaurant La Seine. On the first day, lunch is 77,000 won ($70) and dinner at 82,000 won; by the final day the cost rises to 79,000 won for lunch and 100,000 won for dinner. All prices exclude of tax and service charge. 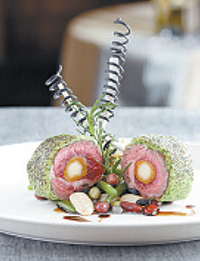 Dec. 14 and 15: The 69th Gourmet Circle Dinner will be held in the French restaurant Seasons. As a tradition that started back in 1996, the dinner will start with a champagne reception at 7 p.m. and guests will be able to enjoy a seven-course meal by Executive Chef Park Hyo-nam. The price is 178,000 won, excluding tax and service charge. Reservations are recommended.

Dec. 20 to 25: Christmas packages are available for the festive season. Priced at 225,000 won, package one includes a one-night stay and two bottles of Bernini Classic Sparkling Wine with cheesecake. Package III is a night in an executive room, breakfast buffet, happy hour for two at the EFL Lounge and a bottle of Bernini Classic or Bernini Blush with cheesecake. The price is at 295,000 won. All prices exclude tax and service charge.

Dec. 21 to 25: The hotel will present its Christmas package consisting of a room of one night, breakfast for two at The Cafe and a Carolina Herrera leather bracelet modeled on one worn by Jacqueline Kennedy. Prices start at 330,000 won, excluding tax and service charge.

Dec. 22: The “Christmas and Mate Season 2” party will be held at the Zoe Bar on the basement floor. The party will include match-making and couple games, a dance performance and a mini-concert staged by a deejay.

Two cocktail glasses will be provided as well. The entrance fee is 30,000 won, including tax and service charge.

The dress code for the party is “Gangnam Style.”

Cafe Amiga will presenting the Christmas Premium Wine Buffet on Dec. 24. The price is at 98,000 won, including tax and service charge.

To Dec. 31: The live-entertainment bar The Timber House is offering Japanese cuisine accompanied by sake and soju. Dishes include caviar on ice with condiments, caviar on assorted sushi, an oyster platter with yuzu ponzu, and many more. Prices start at 39,000 won, excluding tax and service charge.

Dec. 1 to Feb. 28: The hotel is introducing its own charity campaign “Purple in Your Heart.”

This year, the hotel has partnered with the Teddy Bear Museum to produce teddy bears bearing the Plaza’s signature logo.

The bears can be purchased at the front desk and at the hotel’s restaurants and proceeds will be donated to the Korean Business Council for the Arts.

The “Purple in Your Heart” winter package includes a one-night stay and a teddy bear.

To February: The hotel is presenting two winter packages. “The Stay Warm Package” offers a night in a superior deluxe room and winter tumblers for two engraved with the logo of the hotel. The package costs 265,000 won.

“The Snow Country Package” includes a night in a superior deluxe room, a seven-course meal for two at “Hanazono,” a lavender-scented candle, the novel “Snow Country” by Nobel Prize-winning author Yasanuri Kawabata or bottles of Demeter perfume.

Strollers are available as well.

At the buffet restaurant Cafe Elysee, children under 12 can receive the “Kids Eat Free” benefit where they can eat lunch or dinner for free.

*Information is culled from the hotels.