After 5 years, TV beauty has ‘Faith’ in comeback

After 5 years, TV beauty has ‘Faith’ in comeback 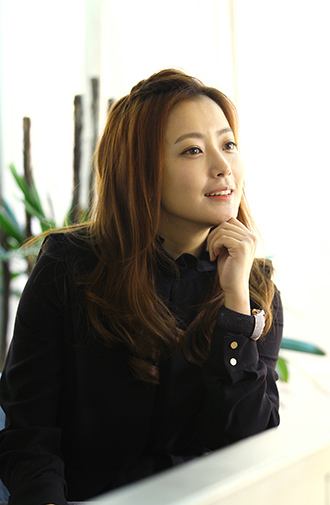 Kim Hee-sun, a beauty icon of the 1990s and 2000s, is back after five years of domestic duties. [JoongAng Ilbo]

Kim Hee-sun was synonymous with beauty in 1990s and 2000s when she effectively ruled the brown screen. Unlike most actresses whose public images were built up as prim and poised ladies, Kim’s signature roles were typically young women who stayed true to their heart.

When Kim got married in 2007, however, she left the entertainment scene to devote her time to being a wife and a mother to her daughter.

After five years, Kim ended her hiatus with a role in the drama series “Faith.”

In the period romance, Kim plays a plastic surgeon named Eun-su, who travels back in time 700 years to the Goryeo Dynasty. There, she meets and falls in love with Choi Young who is the leader of the royal guard, played by Lee Min-ho who is 10 years younger than Kim.

Although the drama series ended last month with a 10.1 percent audience share, “I’m happy with it because I didn’t expect that much,” said Kim during an interview with Ilgan Sports, the sports daily of the JoongAng Ilbo.

Q. This is your comeback performance after five years’ hiatus.

A. It has indeed been five years, but it doesn’t really feel like it because I had been preparing for “Faith” for three years.

Still, wasn’t everything new again for you?

On the first day of shooting, I went out to the set two hours early to see Lee act. I really thought that my heart was going to burst because I was worried whether I could fit in. But when it was my turn to shoot, I really got into it. I even told the director, “I’m doing better than I thought.”

Fortunately, there weren’t any controversies about your acting.

Well, I worked in this industry for 20 years (laughs). I filmed 10 dramas during the 1990s and six of them had reached more than 30 percent viewer share. I wasn’t just lucky. There is a reason why I have been acting throughout all these years. I do my very best every time.

Wasn’t the viewer rating for “Faith” quite low compared to your previous works?

Don’t a lot of people watch TV through their phones and Internet these days? For me, it was not bad at all, and it also helped that in the beginning expectations were low. I mean, there were controversies over the pairing of Han Ga-in and Kim Soo-hyun when they did the drama “The Moon Embracing the Sun.” Many viewers complained they couldn’t get into the love story because they didn’t look like a couple at all. I was worried that would happen to me, as well. Lee is such a top star and our age gap is so big that I thought a lot of drama fans were going to criticize me. But still, I went for it because life is all about being adventurous.

Was there a particular reason why you had waited for “Faith” for such a long time?

Isn’t the character of Eun-su realistic? I think that up until now, every single doctor character has been unrealistically portrayed in dramas. It’s too idealistic that a doctor is so selfless and only cares for the patients, even in dangerous situations. But Eun-su is not like that and that’s why her character was so appealing. Nobody would just pass by a 30 billion ($26 million) ancient celadon. Having that would change one’s destiny. I really liked that Eun-su kept holding onto that celadon until the end and was ignoring her patient. But when that aspect of Eun-su was shown to the audience, they didn’t seem to like it that much.

How was acting with Lee?

He is by far the nicest actor I’ve ever met. He is also very gullible, so he believes everything I say (laughs). He’s also the one who helped me the most while filming this drama. I’m not really baby-faced, but the reason why our age gap didn’t seem too big is that Lee looks older than he actually is.

How did your husband react when you and Lee were playing a couple in the drama?

He used to watch every single episode, but stopped when there was a kissing scene with Lee. I think he said that he didn’t like the way Lee was looking at me. I laughed so much when he said, “I don’t like you and him kissing.” Also, he suddenly started to work out a lot. That’s when I felt that women need to go out and work. Seeing my husband get tensed up made me feel so proud. For my next production, I think I have to work with an ever hotter idol.

Is there any drama you like to watch these days?

I’m actually a fan of “Ohlala Couple.” Even when “Faith” was still being broadcast, I always changed the channel for “Ohlala Couple.” Shin Hyun-joon’s acting in that drama is really the best.

My husband wants a second child, but seeing how hard it is to go without seeing my daughter, I think it will be a while before we have another child. Right now, I’m just trying to carefully choose what I want to do for the near future.