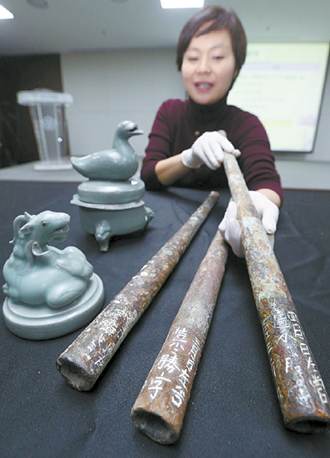 The National Research Institute of Maritime Cultural Heritage revealed yesterday relics discovered in Korea’s southern waters. Three guns from the 16th century of Joseon Dynasty and 70 pieces of celadon from between 12th and 14th centuries of the Goryeo Dynasty were discovered in an underwater survey off Jindo, South Jeolla. Officials believe the guns, in particular, were used during the Myeongnyang Battle in 1597, which was part of the Imjin War (1592-1598) between Korea and Japan. In that battle, Admiral Yi Sun-shin defeated 133 Japanese vessels with just 13 vessels. The celadon pieces include giraffe- and duck-shaped lids of incense burners, which officials say are of such high-quality that they must have belonged to royalty. Officials presume they were being transferred from South Jeolla’s Gangjin - where they were made - to Goryeo’s capital Kaesong (in the North). The underwater survey which began in September was initiated after professional thieves targeting cultural properties were arrested last year and they confessed they found celadon pieces near Jindo. Korea has, in recent years, highly invested in underwater archaeology. Officials say they will resume the underwater survey near Jindo in May of next year, adding that what’s discovered so far must be only 1 percent of what’s down there.[YONHAP]