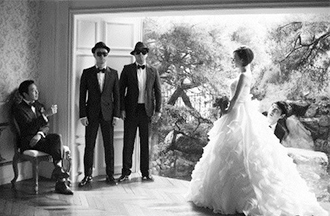 Singers Haha and Byul’s celebration of their secret October marriage is expected to be attended by a host of celebrities and prominent figures in the industry. The event is set to take place today in Yeouido, western Seoul.

Television personality Kim Je-dong, who is one of Haha’s friends and neighbors, will host the event, while one of Haha’s closest and dearest friends Kim Jong-guk will perform a special song for the couple.

The two have been making headlines since August when they revealed they were dating and would tie the knot.

When Haha took an active role in Byul’s father’s funeral last month, many were surprised because the vigil was only obligatory for family members. He then made public the fact he married Byul in a secret ceremony on Oct. 14 - just a day before Byul’s father passed away.

“They didn’t know at the time that Byul’s father would die so soon,” said a source close to the star. “But they wanted to give him peace of mind while he was in hospital.”