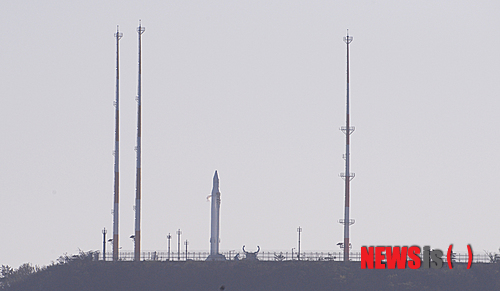 NARO SPACE CENTER -The automatic countdown for the launch of South Korea's space rocket halted with less than 17 minutes left until its scheduled launch at 4 p.m. Thursday.

The Korea Aerospace Research Institute said "a problem" had been detected in the upper, second-stage rocket of the Korea Space Launch Vehicle-1, also known as the Naro-1.

"The countdown will resume after the problem is addressed," it said.

Vice Minister of Education, Science and Technology Cho Yul-rae said it would take about 30 minutes to determine whether the problem is serious enough to cause a postponement of the scheduled launch.

The planned launch of the Naro-1 space rocket was to be South Korea's third attempt to fire off a space rocket from its own soil for the first time. The first two attempts in 2009 and 2010 ended in failures.