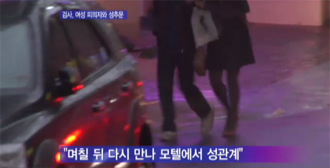 Police are trying to track down people who have distributed pictures on the Internet of a suspected thief who allegedly had sex with a junior prosecutor to help her case.

The Seocho Police Precinct in Seoul said on Wednesday they have launched an investigation to trace the distributtion of photos of the 43-year-old woman surnamed Yoon, after receiving a request from her attorney Jeong Cheol-seung.

The attorney told police that two pictures of Yoon appeared on the Internet Nov. 23 and began spreading rapidly Monday through social networking services including Facebook and Twitter.

The JoongAng Ilbo could not confirm that the pictures are of the suspect.

“Our client’s photos were leaked by unidentified persons,” the attorney told reporters at a press conference held at his office in Jamwon-dong, southern Seoul. “Since the photos were leaked, Yoon and her children can’t go home and have been scouting the area for somewhere to spend the night. She also started showing symptoms of panic disorder and post-traumatic stress disorder.”

The attorney said a photo of a strange woman is also being circulated as a photo of Yoon.

On Nov. 25, prosecutors arrested a junior colleague surnamed Jeon for allegedly having sex with Yoon in his office and at a motel while investigating her for 15 counts of stealing from department stores and stealing goods worth around 4.5 million won ($4,145).

On Monday, the Seoul Central District Court rejected a request to issue an arrest warrant against Jeon, saying it disagreed with the charge of bribery against him.

The prosecution is trying to prove that Yoon used sex as a bribe to get more lenient treatment in her investigation from Jeon.

The case has been used as an excuse by senior prosecutors to mutiny against Prosecutor General Han Sang-dae, who is expected to announce his resignation today.