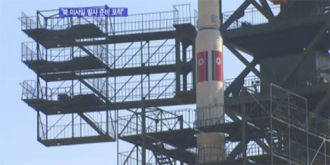 Amid growing speculation that North Korea is gearing up to attempt its second missile test this year, an analysis by a leading American think tank showed Thursday that Pyongyang could be ready to test a long-range ballistic missile as early as next weekend.

“Preparations for a new North Korean rocket launch appear to be underway at the Sohae Satellite Launching Station located on its west coast,” said the report, written by Nick Hansen for “38 North,” a Web site managed by the U.S.-Korea Institute at Johns Hopkins School of Advanced International Studies.

“If Pyongyang follows past practice in preparing for a launch, it could be ready to fire a rocket as early as the end of the first week in December,” the report read.

Hansen, an expert on imagery analysis, based the report on a study of satellite images released by operator DigitalGlobe on Nov. 23 and 26, which showed increased activity at North Korea’s launch site in Tongchang-ri, North Pyongan Province in northwestern North Korea.

“Trailers carrying the first two stages of an Unha [also referred to as the Taepodong-2] rocket were spotted parked near the main missile assembly building, a clear indicator that the rocket stages are being checked out before moving to the pad for an eventual launch,” the report said, noting other ongoing launch-related activities such as empty tanks at different locations, which indicate that the “propellant buildings at the pad have likely been filled in preparation for the fueling of the rocket.” The assembly building is 800 meters (875 yards) away from the satellite launch station.

The report also noted that there’s increased activity at buildings nearby where guests visiting the site presumably stay and that three temporary parking structures have been set up near the buildings.

It is the first time a specific timing has been proposed for the North’s missile launch based on an analysis of recent satellite images.

South Korean military officials have also noted “there are apparent signs of preparations for a missile launch in the North.”

Pyongyang has not warned the international community of a planned test launch, as it did before a failed rocket launch in April.

“Past practice has also been to announce dates and hours for sea or air closure areas for the rocket’s first and second stage impact areas,” the report said, “and to file for a frequency plan for a satellite in advance .?.?. Since that has not happened yet, the window would appear to be closing for an early launch.”

North Korea experts in Seoul also note that Pyongyang might be proceeding cautiously after the embarrassing failure in April, when the blastoff was part of celebrations marking the 100th anniversary of the birth of national founder Kim Il Sung.

“We all agree it would be extremely inadvisable to proceed with the test,” said Portuguese Ambassador Jose Filipe Moraes Cabral, head of the council’s North Korea sanctions committee.