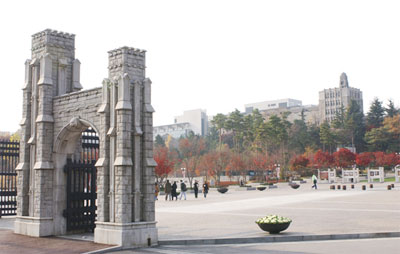 A council representing professors at Korea University will hold a general meeting Thursday on campus for the first time since the council was formed in 1989 to discuss ways to bolster the school’s image in the wake of a failed high-risk investment.

The council said Friday it will hold a general meeting at the university in Anam-dong, Seongbuk District, northern Seoul, with all professors of the school as well as the university’s president, Kim Byoung-chul, and Kim Jae-ho, the head of the school board.

The council said it sent a list of questions on the school’s current situation and the failed investment to the president and the board director.

In order to hold the meeting, at least a half of the university’s 1,488 professors must attend.

In February, according to the council, the university foundation invested about 81 percent of the school’s cash assets (49 billion won, or $45.2 million) in equity-linked securities and trusts, and lost an estimated 10 billion won.

As a result, university caused a public outcry when it informed students that tuition for the 2012-13 academic year would be only 2 percent lower and blamed the bad investment.

The average tuition for the university in 2011 was 8.4 million won.

“The university is currently in a serious crisis,” said Kim In-mook, a physics professor and chairman of the council. “Growth engines for the university can’t be found anywhere and it is in serious financial difficulties. We can no longer accept the school leadership’s inadequacy idly anymore.”

The professors’ council will likely demand reform and reorganization of the leadership structure, measures to improve the university’s reputation at home and abroad, and full disclosure of the exact amount of investment losses and names of school foundation officials who managed the investment.

In a 2006 JoongAng Ilbo evaluation, Korea University was ranked ahead Yonsei for the first time at fourth in the nation, but fell to sixth this year.The school also once was ranked 150th in The Times’ world university rankings (No. 2 in Korea) but was 240th this year.