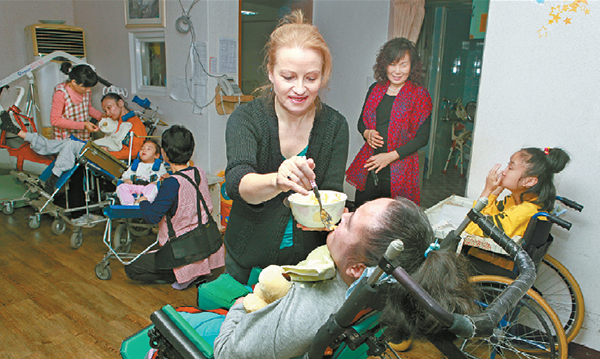 Anne Wightman, wife of Scott Wightman, the British ambassador to Seoul, assists Seong-hee, 41, a resident at the Holt Ilsan Center in Goyang, Gyeonggi, on Nov. 26. By Park Sang-moon


The 30-acre Holt Ilsan Town Center, surrounded by vivid crimson fall foliage, is a small community on a hillside in Goyang, Gyeonggi, for those who have been separated from their families because of their disabilities. For the Holt residents, this is their home.

Seong-hee, 41, has been at the center since she was a baby. She is able to take part in basic conversations but has been confined to a wheelchair her entire life.

It is lunchtime at Seong-hee’s residence, which houses 20 people of all ages, ranging from toddlers to adults.

Anne Wightman, wife of Scott Wightman, the British ambassador to Seoul, is volunteering on behalf of the British Embassy. When she learns that Seong-hee is over 40, she smiles and says, “You have a very youthful face!”

The housemother interprets, and Seong-hee beams at Wightman with a nod.

Wightman and Douglas Barrett, head of trade and investment at the embassy, toured the center’s Memorial Hall and facilities. The British Embassy also donated 2.4 million won ($2,215) to the Holt Ilsan Center, funds that were raised through the annual Children in Need charity event earlier this month.

The embassy representatives met with Molly Holt, the current chairperson and daughter of the founders, on Nov. 26. Holt moved to Korea from the United States in the fall of 1956 after the Korean War.

The residential care facility was established a year earlier by Harry and Bertha Holt from Oregon, who opened a small orphanage for the victims of the war that then grew into Holt International Children’s Services, an adoption agency.

Harry and Bertha were moved by an account of the Korean War they saw in a documentary.

“We saw a documentary on the orphans left from the Korean War, and my parents felt the need to go to Korea,” said Molly Holt, who has five siblings. “They adopted eight children, to match the number of people in our family.”

Half a century ago, in the aftermath of the war, the area around the Ilsan Center was barren, with only the orphanage on a hillside. Since then, the Ilsan Center has sprawled across the area with 19 buildings including a school, gymnasium, rehabilitation centers, clinic and residencies.

The area around the center now bustles with stores, restaurants and schools.

“The Holt Center is an amazing story of how one couple saw a video about the Korean War and devoted their lives to the cause,” said Wightman. “I can see that the residents are very well cared for.”

As the embassy representatives visit, most of the school-age children are at public day care facilities until early afternoon or attending classes. Most children are sent to different facilities to learn how to become independent.

“Most of the 270 residents have become separated from their families due to disabilities, which include cerebral palsy, Down syndrome, and other mental and physical disabilities. Their ages range from infants to those in their 60s,” said Park Kkod-song-e, a social worker at the Holt Ilsan Center.

More than 30 residents have married and more than 100 have found jobs and moved out.

Others attend school or receive training and therapy. Park added that Holt emphasizes therapy more than anything else, including speech, physical and occupational, in order to ensure that their residents learn basic daily tasks to the best of their abilities.

The nutritionist plans healthy meals, usually porridge with meat, vegetables or seafood. “Calorie intake is very important to have the energy to take part in training and therapy,” Park said.

Young-hoon, 14, came to the Holt Center five years ago malnourished with stomach problems. He is fed through an L-tube as he cannot move his arms or legs.

“Some 15 percent of the residents here are fed through tubes and as more of them get older, more will need to resort to feeding tubes. Seong-hee already is having more difficulty swallowing.”

The British Embassy held its annual Children in Need Charity Auction and Curry Night on Nov. 16 with sponsors including Standard Chartered.

“Each year for the past six years, the British Embassy chooses a facility to make a donation to the Children in Need Charity,” Barrett said, adding that the Holt Ilsan Center was recommended to the embassy this year.

Half of the proceeds from the fundraiser went to the U.K.’s Children in Need and the other half went to the Holt Ilsan Center.

Children in Need is a BBC charity that since 1980 has raised funds to help disadvantaged children in the United Kingdom and holds an appeal night each November.