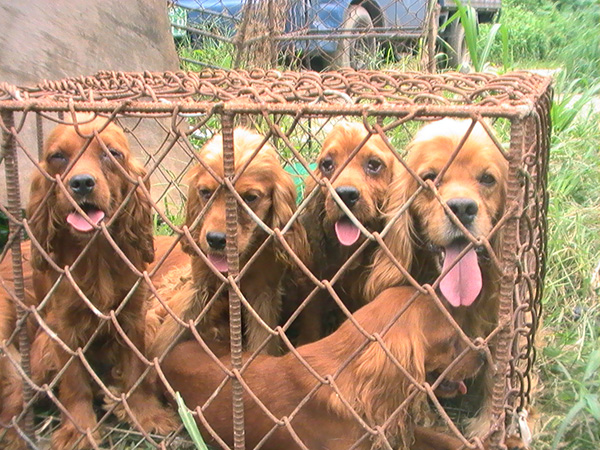 Four cocker spaniels appear in a cage at a slaughter house in Namyangju, Gyeonggi, in August 2010. CARE says it rescued around 10 cocker spaniels and two dozen “yellow dogs” that day. Provided by the Coexistence of Animal Rights on Earth


It’s past midnight at an apartment complex in Gwangmyeong, Gyeonggi, and Burgos Garcia stealthily approaches a gray Hyundai Galloper in the parking lot.

“I was tipped off from a source that there have been dogs caged in this vehicle for days,” said the teacher-turned-animal activist. One of the sedan’s windows has been left open three inches. “It’s so the dogs can breathe,” says Garcia. A strong whiff of fetid animal escapes through the crack.

With a slim flashlight, Garcia peers into the car. Two small cages are on the backseat. One cage holds a single dog, the other has two squeezed in. One is a beagle. 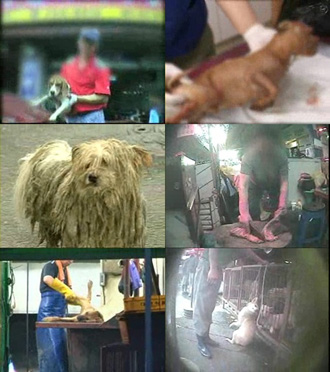 According to the 28-year-old activist, the owner of the vehicle runs a dog farm near the apartment. “These pets are soon to be moved to the farm, and eventually sent off for slaughter.”

The farm is three kilometers (1.85 miles) away, shielded by black fencing all around. It’s a single structure. The sound of dogs barking can be heard inside.

Inside the farmhouse, there are more than 10 cages with a variety of dog breeds, some mere puppies. A big pot used to mix human food waste with dog feed is nearby. A few more dogs are on leashes tied to stakes in the ground, giving them only a meter of leeway to move.

“This one was raised as a pet,” Garcia says of a dog in a cage with matted white fur. “We need to first find out where and how this man has gotten these dogs and see if there was any fraud or theft involved in getting them.”

Because of the highly conflicted attitude of Korea’s society and government over the custom of eating dog, the raising, slaughtering, selling, preparing and eating of dogs are gray areas in terms of the law. Those activities aren’t exactly legal, but neither are they against the law.

One result of the legal ambiguity is that the government doesn’t keep statistics about the industry as it would for legal businesses. No one has an exact figure for the number of dog farms in the country or dogs being raised.

According to the private Korean Dog Meat Farmers’ Association, 20,000 farms raise dogs for slaughter and consumption in the country. Most are small, but the largest, which is in North Gyeongsang, is raising 5,000 dogs at any time. According to the association, about two million dogs are slaughtered and consumed every year.

One red flag issue is whether dogs raised as pets are being sold and eaten, either after being abandoned by owners or stolen by greedy farmers. People in the dog meat industry insist that only one type of mongrel is used, so-called yellow dogs, a polite translation of the Korean term, which means “dung dog.”

Animal rights activists say that’s wishful thinking or obfuscation of the crueler reality of the trade.

“When pet owners accidently lose their dogs, the first worry they have is that their dogs are headed to the slaughterhouse in the market,” says Park So-yeon, director of the animal rights group Coexistence of Animal Rights on Earth (CARE).

Another result of the legal void is that when animals are mistreated, the government has no reason to get involved. The job is left to animal activists like Garcia, a former university lecturer before he started working full time as CARE’s lead investigator last year.

“I saw hanging, beating, electrocution and bleeding out,” he says. The notion believed by most Koreans that there is only a certain breed of dog used for eating is a total fabrication, he says.

“It’s a lie to make people feel less guilty about consuming dog meat,” he says. “There is no such thing as a separation of dog breeds into ‘pet dogs’ and ‘meat dogs.’?”

The trade denies this assertion flatly and with some heat.

“There is a clear distinction between pet dogs and meat dogs. How can they be the same?” asks Lee Kwang-choon, president of the dog meat merchants association at the Moran Market.

Located in the southern tip of Seoul, Moran Market is the center of Korea’s dog trade. It sells dog meat to individuals and restaurants and also does a steady trade in kae soju, or “dog wine,” which is made by boiling dog meat with herbs. It is bought by individuals to be consumed as a tonic.

“Pet dogs are not adequate for human consumption because of their small size as well as their special relationship with humans as companions,” says Lee, who has run a dog shop for 28 years.

“And we do not take pet dogs, even when our customers come here asking us to slaughter them,” Lee says. “I ask those people, ‘How could you eat your own pet dog?’?”

Lee’s is one of 30 shops side by side in the odiferous market, each with its own slaughterhouse, kitchen, packing room and area for walk-in customers. In front of the shops are black goats, chickens, rabbits and dogs crammed in cages.

“Let me be clear, we don’t take pet dogs,” stresses Lee. “But one thing I want to say is that when dogs get to this market, they are all treated the same as food products.”

He compares them to young men going for military duty.

“Regardless of what family background they have or what they did in society, people are treated the same way in the army,” he says. “It’s the same for dogs here.”

Animal rights groups say the market vendors protest too much.

“Based on our numerous trips to the market, all breeds of dogs, including pets, were found living in cages in unimaginable conditions,” says Garcia.

A CARE report published in October includes a picture taken last February of a black Labrador in a cage waiting to be electrocuted at a slaughterhouse in a smaller market in Gangwon.

“I saw five dogs trapped in a small cage with their excrement filling up half the cage,” says Garcia. “Those dogs were kept there all day long waiting to be slaughtered.”

“When we call the police in situations like that, they say it’s a private matter,” says Park of CARE. “The Korean animal rights law doesn’t go so far as to properly protect animals’ rights even if dogs are trapped in a vehicle for over a week and not fed.”

“We’ve been calling on the government to designate dogs as livestock in the law so there can be regulations in place for dog farming and slaughtering,” Choi Young-min, director of the Korean Dog Meat Farmers’ Association, told the Korea JoongAng Daily.

“When they see the meat being prepared in our kitchen, customers know right away we only serve yellow dog,” says Ju Eui-soon, who has run the restaurant for over 30 years after inheriting it from her mother-in-law.

“We have seniors who have been decades-long regulars,” she says. “They bring their young grandchildren to enjoy the food here.”

Ju says she doesn’t mind the animus of animal rights groups toward her business. She thinks animal rights activists are mistaken on the issue. They don’t know how to distinguish between meat dogs and pet dogs, she says.

“I myself raise a dog in my house,” Ju says, “and she is totally different from the yellow dogs in the cages.”