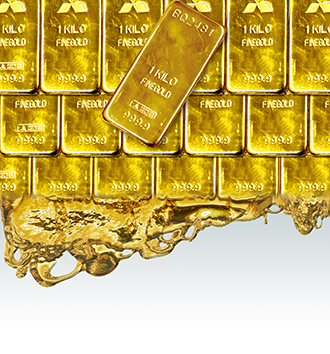 The central bank has increased its gold holdings citing the need to diversify its foreign reserve portfolio, but critics have questioned the timing of the move as the international price of gold has been falling recently.

According to the Bank of Korea yesterday, it bought 14 tons of gold last month. This is the second time this year it has added to its gold holdings after it bought 16 tons in July, bringing its total holdings to 84.4 tons. It made its first purchase since the Asian financial crisis in July last year, when it snapped up 25 tons.

With continued uncertainty stemming from the euro zone fiscal crisis, the central bank seems to be opting for a safer asset, especially given the weakening of the U.S. dollar and the euro. The price of bullion broke a series of records last year. 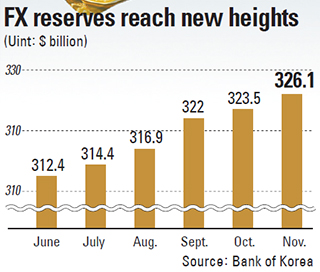 Since then, the central bank has purchased a total of 70 tons and its gold holdings now make up 1.2 percent of the central bank’s foreign reserves, up from 0.9 percent a month ago.

Korea is now estimated to rank 36th in the world in terms of its gold holdings, up four notches from September and compared to 45th last summer.

Amid ample liquidity worldwide, gold is widely viewed as a way to hedge inflation risks, and the bleak global economic outlook makes gold a safer and more attractive asset.

Lee declined to comment on the purchasing prices and future buying plans, citing the possible impact on the market. 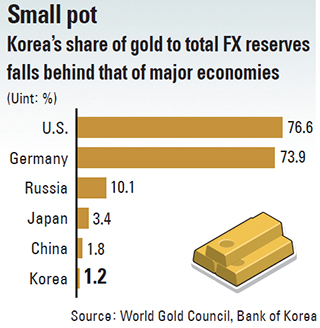 However, the central bank is estimated to have purchased the gold bullion when it was being traded in the range of $1,700 last month, while this month it has fallen to the $1,600 range. On Tuesday it was trading at $1,690.64 an ounce, the lowest rate since Nov. 6.

Market experts say gold prices have been falling as investors wait until the White House and Congress come to an agreement on the so-called fiscal cliff issue.

If the talks fail, a series of automatic tax hikes and spending cuts estimated to be worth $600 billion will go into effect in January.

The Obama administration and the Republicans are deadlocked over how to proceed with the U.S. budget. The Republicans recently proposed a 10-year $2.2 trillion budget cut. But it was immediately blocked by the White House, which wants to increase taxes, especially on the rich.

Other experts are speculating that if the U.S. fails to avert the looming fiscal cliff it could lead investors to make a beeline for safe havens, which could cause gold prices to spike and the greenback to further depreciate.

Meanwhile, last month’s foreign reserves added $2.6 billion won from the previous month to break a new record at $326 billion won. The nation has been setting new foreign-reserve records since August.

The central bank cited increase profit investment for the expanding foreign reserves. As of the end of October, Korea’s was the world’s seventh largest.