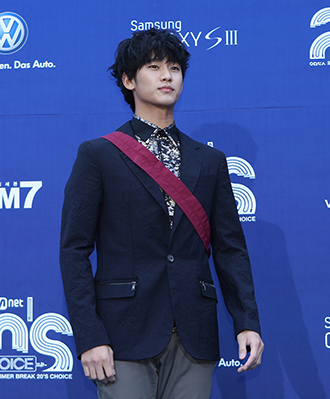 Kim Soo-hyun will leave for Japan on Saturday to promote his drama “The Moon that Embraces the Sun.”

Keyeast Entertainment announced that Kim will spend two days in Tokyo to meet with fans and take part in interviews.

The hit MBC show that aired in Korea early this year and in Japan via satellite channel KNTV in August will be broadcast on NHK from Jan. 20.

The show will be given the 9 p.m. time slot on Sunday nights on the major public broadcasting network.

Ahead of the airing, a special episode with show highlights as well as interviews with Kim, Han Ga-in and other cast members will be shown.

Kim was in Japan in July this year ahead of the airing of the period piece on the satellite network.

Although he’s not as famous in Japan as he is in his home country, Kim’s popularity is expected to catch on, Keyeast said.

“He has a unique style that sets him apart from all the other Hallyu stars who are popular in Japan,” a spokesperson from the agency said.