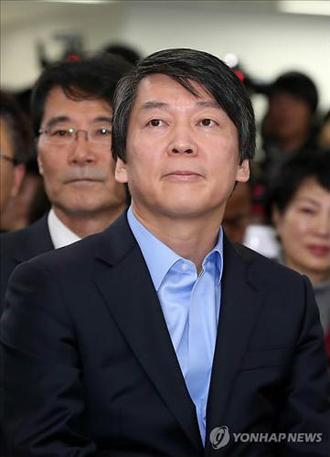 Ahn’s spokesman Yoo Min-young told reporters at around 1:30 p.m. yesterday that he would hold a press meeting to elaborate on Ahn’s plan for providing support for the Democratic United Party’s Moon. But the spokesman withdrew the meeting suddenly, without giving a reason.

Recently, Ahn appeared to be back-pedaling from the DUP’s Moon, although he has publicly endorsed him as a single liberal candidate when he announced he was stepping down from the race.

Despite what the DUP is expecting, Ahn hasn’t joined any of Moon’s campaign activities.

Sources told the JoongAng Ilbo that Ahn reportedly visited a meeting of his former campaign managers yesterday and told them “not to make any decisions today.”

Moon even went to the apartment where Ahn lives yesterday, in an apparent move to persuade him to help his campaign, but Ahn wasn’t there, according to some DUP officials.

Moon waited for Ahn for half an hour, but he couldn’t wait any longer so he left.

“Moon’s visit wasn’t arranged in advance,” Ahn’s spokesman Yoo said yesterday. “Although it appears Ahn was notified Moon would visit him, Ahn wasn’t there because of another appointment.” 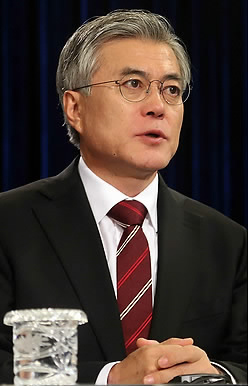 A close confidant of Ahn told the JoongAng Ilbo on Tuesday on the condition of anonymity that Ahn reportedly said he “felt ideological differences from Moon.”

The confidant attended a luncheon on Tuesday with Ahn and other close people at a restaurant in Gangnam, southern Seoul. There, the confidant said that Ahn was asked whether he altered his political position, which is moderate, after the tough negotiation with the DUP over merging candidacies.

Ahn said his position still remain unchanged, the confidant quoted, saying “I’m a rational conservative and also a moderate liberal.” He also reportedly said “I found the difference between [me and] Moon during the televised debate.”

At the live broadcast debate, Ahn and Moon had disagreements over North Korean affairs. While Moon said that he wants to resume inter-Korean talks immediately and even a summit, Ahn said he wants Pyongyang to ensure the safety of tourists at the Mount Kumgang resort before holding a summit.

At the time, Moon attacked Ahn that demanding conditions before holding a summit is no different from the Lee Myung-bak administration’s policy.

According to the confidant, Ahn was also asked how he would help Moon’s campaign and he responded: “I have not decided anything yet. I’m still mulling over it .?.?. one of my personal mottos is not to make the same mistake again. In order to do the new politics, I know why I have failed.”

Although Ahn once again supported Moon publicly in his latest speech at the disbanding ceremony of his camp, many political observers saw the remark as passive and lukewarm.

The DUP still believes Ahn could draw young, swing voters to Moon, if he publicly provides full support for Moon.

“The most important condition for Moon to win the race is Ahn’s support,” Lee Mok-hui, an official from Moon’s camp, said in a radio interview.