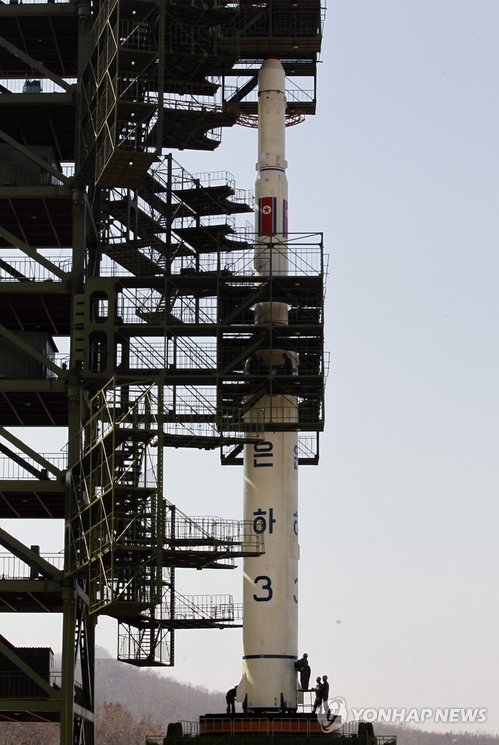 North Korea has assembled all three stages of a long-range rocket on its launch pad, a South Korean official said Wednesday, the latest sign that preparations to fire off the rocket is in full swing.

"North Korea is believed to have completed the installation of a long-range rocket on the launch pad" at the Dongchang-ri base in the country's northwest, a government official said on condition of anonymity. "Some workers are pulling out of the site."

The North is now expected to install support equipment, such as radar, cameras and measuring equipment before fueling the rocket. Should fueling take place over the weekend, the rocket is expected to be launched between Dec. 10-12.

"If the North begins fueling the rocket, fuel tanks will be seen around the launch site," the official said. "If many fuel tanks are spotted, we should take that as meaning that fueling has begun."

Once fueling is completed, the rocket should be launched within three days, he said.

Pyongyang announced Saturday it will launch a long-range rocket to put what it calls a "working satellite" into orbit, with much of the world suspecting it is in reality testing intercontinental ballistic missiles capable of carrying nuclear warheads. 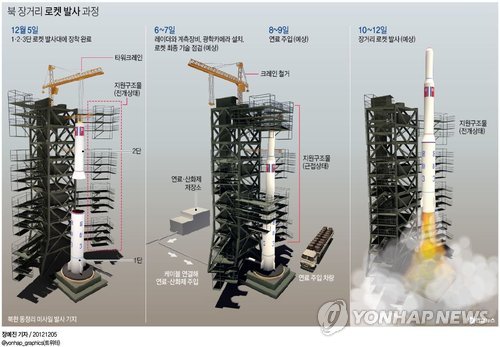 Officials at South Korea's state weather agency forecast no precipitation at the launch site between Dec. 10 and 22, although it will be cloudy. That means the communist nation can go ahead and fire the rocket.

On Monday, North Korea notified the U.N. shipping agency, the International Maritime Organization, about the launch.

Coordinates provided by Pyongyang showed the rocket's first stage would fall into the Yellow Sea between the Korean Peninsula and China, and the second stage drop-off would take place off the Philippines.

South Korea has warned it will take North Korea to the U.N. Security Council and press for new sanctions if the rocket launch proceeds, though it is unclear whether China, the only major ally of the North, would agree to further sanctions.

There have been questions about the effectiveness of any additional sanctions on North Korea, a country that has been under a string of sanctions for decades. Widespread views are that new sanctions would be aimed at identifying and freezing secret North Korean bank accounts overseas.

In 2005, the U.S. imposed similar financial sanctions on Pyongyang by blacklisting a bank in the Chinese territory of Macau with links to the North. That not only froze North Korean money held in Banco Delta Asia, but also scared away other global financial institutions from dealing with Pyongyang for fear they would also be blacklisted.

The measure hit Pyongyang hard, and reports at the time said that North Korean officials had to carry around bags of cash for financial transactions because they were not able to use the international banking system.

"In line with the principle, (we) will first focus consultations on a direction to stop North Korea's missile launch plan," Lim told reporters as he arrived in Washington for a three-day trip.

He headed straight to the State Department for a series of meetings with Ambassador Glyn Davies, Washington's top envoy on Pyongyang, and Wendy Sherman, under secretary of state for political affairs.

Lim and Davies are also scheduled to have a trilateral meeting later in the day with Shinsuke Sugiyama, the director general of the Japanese foreign ministry's Asian and Oceanian Affairs Bureau, who serves as Tokyo's point man on Pyongyang.

"We need to talk about specific ways" to block North Korea from firing a long-range rocket, Lim said. "We will discuss what measures are necessary to maximize diplomatic efforts."