Fines pulled in by FTC for fixing prices jump in 2012

Fines pulled in by FTC for fixing prices jump in 2012 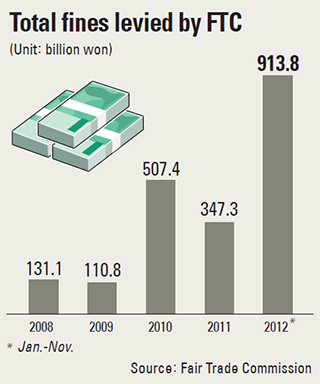 The Fair Trade Commission collected a record number of fines against companies in Korea, almost 1 trillion won ($923 billion), in the first 11 months of 2012.

The commission initially expected to collect 402.9 billion won this year in fines. In all of 2011, fines collected totaled 347.3 billion won.

The FTC credits several large-scale investigations including a collusion case against instant noodle makers in March.

Nongshim and three other local instant noodle makers were found to have colluded for nine years to match product prices and were ordered to pay 135.4 billion won in combined fines, the largest for the year.

Eight construction companies were ordered to pay 111.5 billion won in fines in June after a 32 month investigation on collusion to win deals for the four rivers restoration project.

“We received more penalty payments this year because about 500 billion won levied in the last two months of last year were paid early this year,” said Song Sang-min, a director at the FTC.

Companies get a 60-day period to pay fines.

The FTC forecast it will impose more fines next year, estimating the amount at 603.4 billion won.

Song said the number wasn’t a target but is just an estimate.

“It’s definitely not a target,” he said, “because our goal is to make no company make any fair trade violation.”

Meanwhile, the FTC is expected to get an extra 49 million won in budget for its investigation next year.

“Since the office is moving to Sejong-city, it might be harder for us to keep up with corporate trends and collect information as most companies are based in the Seoul metropolitan area,” said director Yoon Soo-hyun of the FTC’s competition policy division.