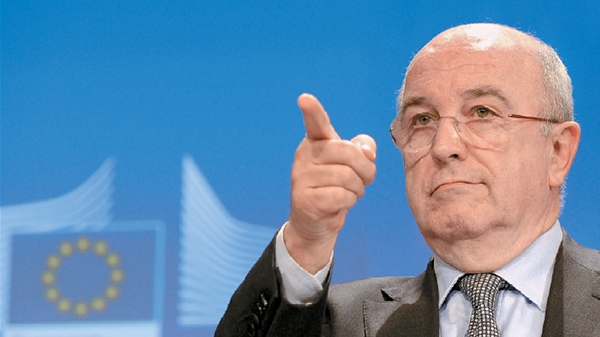 European Commissioner for Competition Joaquin Almunia gestures during a news conference at the EU Commission headquarters in Brussels on Wednesday. Philips, LG Electronics, Samsung SDI and three other companies were fined a record 1.47 billion euros (1.92 billion dollar) by EU antitrust regulators for fixing prices of TV and monitor cathode-ray tubes over almost a decade. [REUTERS/YONHAP]


LG Electronics was slapped with its largest-ever fine of 491.56 million euros (697.5 billion won) on Wednesday by the European Commission for fixing the prices from 1996 until 2006 of now-obsolete cathode-ray tubes (CRTs) used in TVs and computer monitors.

LG is among six electronics producers fined a combined 1.47 billion euros. This exceeds the previous record of 1.38 billion euros imposed by the EU in 2008 on glass makers who supply car windows.

Philips was fined 313.4 million euros, while LG faces a 295.6 million euro penalty. The two companies also share an additional fine of 391.9 million euros for LG Philips Displays, a unit they jointly established in July 2001 that went bankrupt in 2006. Samsung SDI, an affiliate of Samsung Electronics, was also told to pay 150.8 million euros.

Panasonic was fined 157.5 million euros and shares an 86.7 million euro punishment with Toshiba and MTPD, a Panasonic unit. Panasonic and MTPD also share a 7.9 million-euro fine.

“These tubes accounted for 50 to 70 percent of the price of a screen,” EU Competition Commissioner Joaquin Almunia told reporters. “This gives an indication of the serious harm that these cartels have caused over a decade, both to the manufacturers of TVs and computers and ultimately to final consumers who had to pay a higher price than they should have.”

In response, LG said yesterday it has decided to file an administrative litigation against the commission. “We have concluded after legal review that we are not an object of the penalty,” said LG in a statement. “We will take legal steps,” it added, without elaborating. The deadline for an appeal is next February.

The size of the fine was unfair as it was based on the company’s entire output of TV and PC monitors instead of just focusing on CRTs, LG claims.

“LG Electronics objects to this approach as there is no evidence that sales [of other products] were affected by the alleged infringement investigated by the commission,” it said.

LG also said LG Philips Displays is a “completely independent business entity” and it is has “no legal joint responsibility for the company.” Even for the alleged price fixing before establishing LG Philips Display, the charge is no longer valid since five years have already passed. This is the maximum window during which the commission can levy fines for acts of collusion under EU law. LG handed over all its CRT-related businesses to LG Philips Display when the latter was established.

LG said Korea’s Fair Trade Commission, as well as antitrust bodies in such countries as the United States, Japan, Canada and the Czech Republic, have recognized LG’s argument and nullified their decision to slap fines.

“For LG, the fine appears to be excessive, way more than the approximately 290 billion won in provisions it set aside,” Kim Ji-san, an analyst at Kiwoom Securities. “Still, it’s a one-time event so I think the share-price drop will be short-lived.”