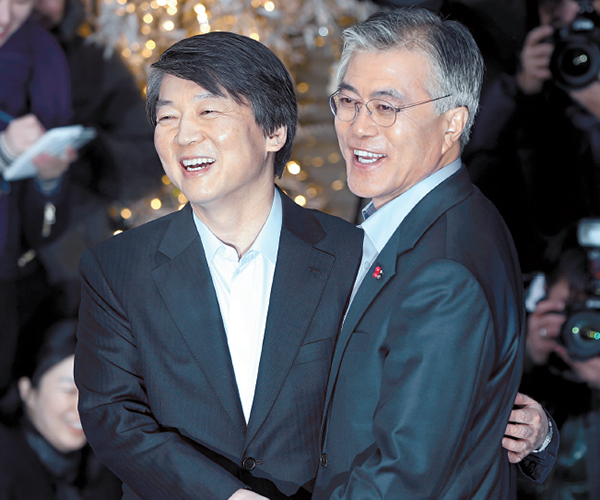 
Former presidential hopeful Ahn Cheol-soo yesterday said he will throw his full support to the Democratic United Party candidate Moon Jae-in, which should buck up a campaign with falling approval ratings.

But it took the independent Ahn a long time to come around, after two less-than-enthusiastic endorsements for Moon - and almost desperate maneuvers to avoid meeting him on Wednesday.

After a meeting yesterday at a restaurant in central Seoul, Ahn shook hands and even hugged Moon before reporters and photographers and said, “Today will be marked as a significant watershed in this year’s presidential election. Respecting the desires of many people, I will do my best.”

Moon glowed after getting the endorsement he has strived for since Ahn announced Nov. 23 he was quitting the race after getting tired of the DUP’s hardball tactics in negotiating a merger of their candidacies.

“Ahn told me he will offer full support and enthusiastically join the campaign,” Moon said. “I really appreciate his help.

“Now I believe people who want new politics and a power shift from the ruling party to the opposition have become one,” Moon continued.

Moon and Ahn will campaign together today in Busan and also issued a joint statement.

“Both of us clarified the perception that realizing a new kind of politics is a historic duty,” it said. “We both decided to cooperate more with each other for the transition and a victory in the presidential election.

Even after the election, they said they would “closely negotiate with each other,” the statement read, “to overcome national crisis and realize a new kind of politics.”

“Ahn made a phone call to Moon at around 1 p.m. and they reached an agreement to meet with each other,” Yoo said.

Before the meeting, Ahn issued his own statement on why he made the decision.

“From now on, I will begin my support for Moon,” Ahn said. “It’s for completing the candidacy merger and winning the presidential election [for the opposition party]. I believe this is the way to follow people’s will.

“The reason I gave up my candidacy is to respect the people’s desire for new politics,” Ahn said. “But at this moment, concerns are growing about difficulties of realizing these two goals.

“For those goals, I will add my strength [to Moon’s] without any conditions,” he said. “I believe people who supported me will follow me.”

For weeks, Ahn clashed with DUP camp managers over how to merge his campaign with Moon’s and which man should be the presidential candidate. When he dropped out on Nov. 23, he did little to encourage his supporters to vote for Moon.

The DUP became increasingly desperate for Ahn’s unqualified endorsement of Moon. Moon even visited Ahn’s apartment in Seoul on Wednesday to get it, but Ahn was allegedly not at home to receive him.

Some of Ahn’s supporters even went over to support the ruling party candidate Park Geun-hye.

Moon’s poll numbers fell. According to a poll by OhMyNews, a liberal news organization, the approval rating for the Saenuri’s Park jumped to 50.6 percent yesterday from 49.1 percent on Tuesday, while Moon’s dropped to 43.3 percent from 45.8. It was the first time that Park scored more than 50 percent in one of its polls.

“So far, we see there have been about 5 or 6 percent of undecided voters, and I guess at least half of them will move to Moon immediately following Ahn’s decision,” Lee said. “Additionally, while Park is carrying out her campaign alone, two guys moving together across the country and rallying support could really help.”

A number of liberal bigwigs attended the opening ceremony of the group in central Seoul and said they supported Moon.

“The public desire for a power transition [from the ruling party to the opposition] has faced a crisis,” members of the group said in a joint statement. “We publicly recognize the DUP’s Moon as ‘the candidate of the public.’?”

In fact, forming such a group was proposed by Ahn when the two liberal candidates were in negotiations.

Moon also announced a series of pledges to reform politics, including cutting the total number of lawmakers in the National Assembly. Reducing the number of parliamentary seats was a core pledge of Ahn.