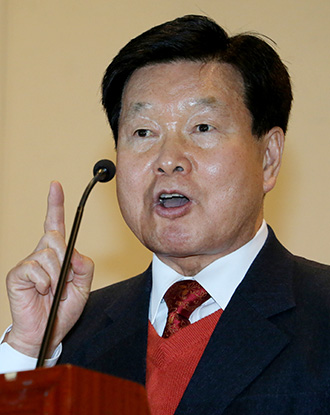 Kim Dae-jung loyalists, known as the Donggyo-dong faction named after the location of Kim’s residence in western Seoul, were split over whom they will endorse in the presidential election.

While significant numbers of them publicly expressed support for the Saenuri Party’s Park Geun-hye, others stayed in the Democratic United Party and supported Moon Jae-in.

At the event, Hahn, nicknamed “little DJ” for his strong ties to the late president, declared his support for Park.

In his speech, Hahn said Kim, after he won the presidency, walked the path of reconciliation although he and his supporters suffered from the dictatorial rule of Park’s father.

“I believe we must continue to walk that path,” Hahn said. “I support Park in this presidential election.”

He also said he has faith in Park that she will realize her pledges to develop the Jeolla region after she wins the election.

He also said Park’s agenda of “grand national unity” by ending regionalism-ridden politics in Korea, chiefly the Jeolla and Gyeongsang rivalry, was also the vision of the late President Kim and he supports her in this.

Hahn also did not hide his displeasure with the DUP and the Roh Moo-hyun faction, including Moon, for having used the Kim loyalists for political gain and abandoning them years ago.

While Park increasingly won endorsements from Kim loyalists and expanded her influence in the Jeolla region, others in the faction expressed displeasure.

Former lawmaker Kim Ok-doo, a first-generation member of the Donggyo-dong faction, already made public an open letter to Hahn on Wednesday after news reports said Hahn would announce his support for Park.

He, then, reminded Hahn that they had spent 45 years together until President Kim died after joining the faction in 1965 during the Park Chung Hee regime’s authoritarian rule.

Reminding Hahn of their political persecution and days behind bars during the Park regime, Kim told Hahn that it was wrong for him to abandon his lifetime belief and join the Saenuri campaign.

“You were once called little DJ,” Kim wrote. “How can you do this?”

Kim, then, asked Hahn not to ever mention the late president’s name in the future if he has no intention of changing his mind.

Not only Kim, but also another Donggyo-dong faction leader Kwon Roh-kap also expressed displeasure that some of their comrades declared their support for Park.

“They left the DUP because the party didn’t give them legislative nominations,” Kwon said. “I don’t leave even though I have my complaints. That’s against the will of President Kim.”

Established around the time of the 1971 presidential election, the Donggyo-dong faction supported Kim Dae-jung’s political career for decades. Kim Ok-doo and Kwon were the first-generation members and Hahn joined the group later.

Ahead of this year’s election, some key members of the faction including Han Gwang-ok, who served as chief of staff to the Kim Dae-jung Blue House, joined the Saenuri Party under Park’s theme of grand national unity.

More senior members of the Donggyo-dong faction such as Kwon, Kim and DUP floor leader, Park Jie-won, however, didn’t follow them and declared their support for Moon.

The Donggyo-dong faction first faced a crisis when Kim’s presidency ended in 2003.

President Roh and his followers created the Uri Party in 2004, while the Donggyo-dong faction remained to defend the Democratic Party.

After the Uri Party lost its popularity, the Roh faction merged again with the Democrats in 2007 and created the Democratic United Party in February 2008.

While some Kim loyalists including Hahn said the Roh faction has discriminated against them and paid no attention to the Jeolla region during Roh’s presidency, the Moon campaign denies the accusation.