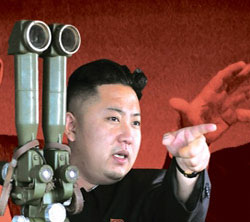 North Korea said it may delay a much-criticized long-range rocket launch originally scheduled for as early as today, but gave no hint of the reasons.

Scientists and technicians were “now seriously examining the issue of readjusting the launching time of the satellite for some reasons,” the Korean Committee of Space Technology said yesterday.

Analysts said technical problems or snow, rather than overseas political pressure, could be behind the delay in what the North calls a satellite launch.

One said the country’s new leader may have been rushing the blast-off set between today and Dec. 22 in an attempt to mark a key political anniversary. A long-range launch in April, also purportedly to put a satellite into orbit, failed embarrassingly when the rocket blew up seconds after liftoff.

The English-language version of the space committee’s statement, carried on the official news agency, said preparations for the latest launch had been in “the final stage.” The self-proclaimed nuclear-armed nation insists its three-stage rocket will blast off from a west coast site to launch a satellite for peaceful scientific purposes.

The United States, and its allies South Korea and Japan, say Pyongyang plans a disguised ballistic missile test that violates UN resolutions triggered by its two nuclear tests in 2006 and 2009.

A U.S. think tank, the U.S.-Korea Institute at Johns Hopkins University, said Friday that preparations may have been delayed by heavy snow.

“Sunday’s announcement was only made by scientific authorities, meaning the most likely reason is either technical issues or weather conditions,” said Jang Yong-seok from the Institute for Peace and Unification Studies at Seoul National University.

Pyongyang has apparently “rushed too fast” to time the launch to mark the first anniversary of the death of leader Kim Jong-il on Dec. 17, 2011, said Yang Moo-jin of Seoul’s University of North Korean Studies.

“It showed how desperate and time-pressed the North was to showcase its scientific breakthrough to its people on the key anniversary and subsequently rally support for the new leader, Kim Jong-un,” Yang told AFP.

The young and inexperienced Jong-un took over from his late father last December, the second father-to-son power transfer by the Kim dynasty that has ruled the isolated and impoverished state with an iron fist for some 60 years. Analysis of satellite imagery suggested preparations at the Sohae satellite launch station were proceeding “more slowly than previously reported,” the U.S.-Korea Institute said.